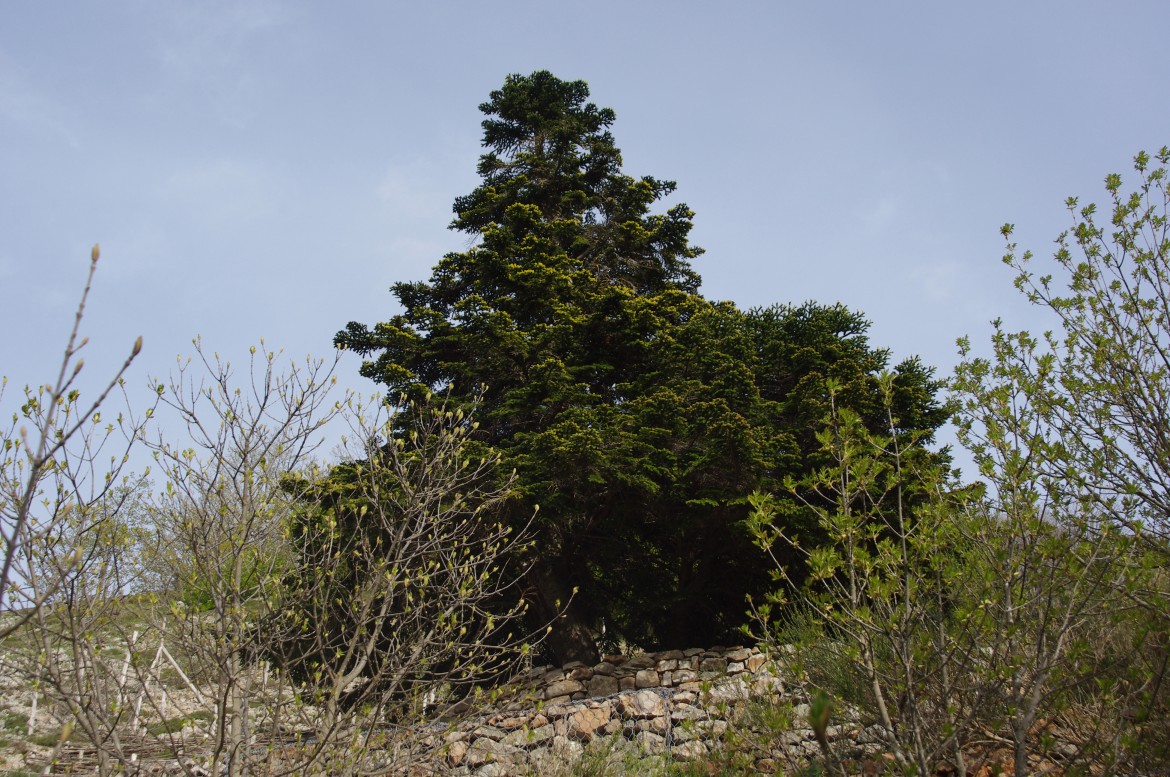 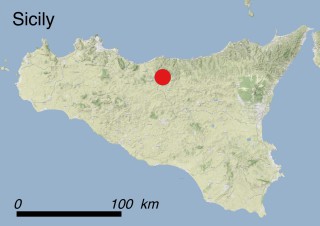 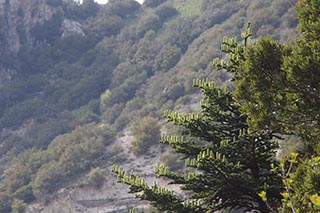 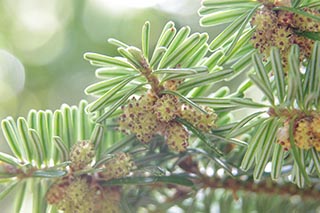 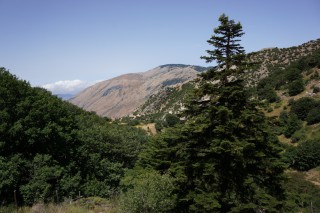 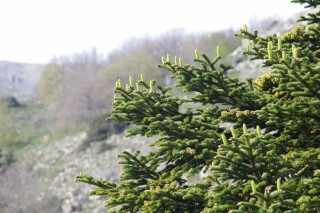 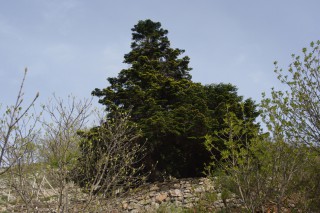 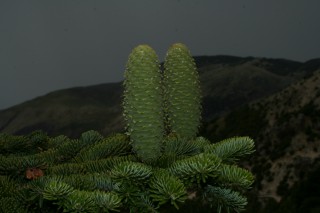 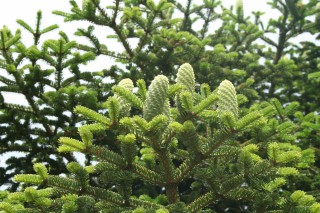 Linares J.C., 2011. Biogeography and evolution of Abies (Pinaceae) in the Mediterranean Basin: the roles of long-term climatic change and glacial refugia. Journal of Biogeography, 38 (4): 619-630.

The last individuals of the Sicilian fir occur on the Madonie Mts, either isolated or in very little and scattered nuclei within discontinuous mountain shrubland and forest communities (Habitats 1.4.4: Mixed deciduous and coniferous woodland and 3.4.1: Temperate and Mediterranean-montane scrub). More in detail, they grow on the steep slopes and screes of Vallone Madonna degli Angeli, Mt. Scalone, Mt. Pene and Mt. Cavallo between 1350 and 1700 m a.s.l., on bare soils mostly deriving from quartz sandstones.

Abies nebrodensis has a single erect stem which, according to observations on cultivated individuals, may grow up to at least 20 m tall and may have a diameter of at least 75 cm. In mature trees the crown is broad and conical. The bark is smooth and light grey in young plants, turning orange and becoming thicker, more rugged, and scaly with age. The needles are short (10-22×2-3 mm), have flattened cross-sections and variably shaped (from obtuse to mucronulate) tips. Their upper surface is dark green and their underside striped blue-green. The needles are arranged in two rows in a horizontal plane and persist during the entire year. The cones are 8-12 (up to 20) cm long when ripe. They are composed of seed scales, slightly hairy towards their ends and spirally arranged around an axis. Each scale is subtended by a bract with a central short tip. Two light brown winged seeds are inserted at the base of each scale. This species is closely related to Abies alba, but has more resinous buds and shorter needles.

Although recent genetic studies pointed out that the Sicilian fir is a well differentiated species, it shows nonetheless a close relationship with southern Italian Abies alba populations.

The scientific name ‘nebrodensis’ is somewhat misleading: in fact, the Madonie Mts. were once called ‘Nebrodes’, while nowadays the term ‘Nebrodi’ refers to another mountain range located further eastwards in northern Sicily.

Recent paleoecological studies carried out on northern Sicilian mountain ranges suggest that the Sicilian fir may have been more widespread until recent times, probably occurring at lower altitudes together with deciduous and broadleaved species. Hence, many centuries ago Abies nebrodensis was probably common in several forest ecosystems of the island, and for a long time it may have represented one of the most important trade resources for the people living in the mountain ranges of the island. Some sources quote its presence on the Nebrodi Mts. and on Mt. Etna, where it probably disappeared just a few centuries ago. As a matter of fact, during the VIII-V centuries B.C. some Greek colonies of north-eastern Sicily coined money bearing the unmistakeable silhouette of a fir. Later on, fir wood was used for the doors and the roof-beams of several churches of northern and eastern Sicily until the end of the Middle Ages. Human pressure (logging, fires) and climatic oscillations may have favoured the spread of deciduous trees such as Fagus sylvatica, Quercus petraea and Q. cerris, which outcompeted the Sicilian fir, so that it was considered extinct already half a century before being rediscovered on the Madonie Mts. in 1957.

This species has been categorized CR (Critically Endangered) according to IUCN Red List Criterion D (i.e. plant population numbering fewer than 50 mature individuals). The current population includes only 30 adult trees and AOO and EOO are <1.5 km2. The poor health of the seedlings and saplings grown in the tree nurseries and the low sexual performance of adult individuals should be considered as an issue of a bottle-neck effect due to the limited population size, even if a significant genetic variability has been detected. Habitat degradation (threat 11.1: Habitat shifting & alteration), grazing and trampling of young individuals by introduced herbivores such as boars and fallow deers (threat 8.1.2: Invasive non-native/alien species - Named species), the genetic pollution due to frequent hybridization with non-native firs co-occurring in its natural range (threat 8.3: Introduced genetic material) represent the main threats for Abies nebrodensis. Also global warming (threats 11.2: Droughts and 11.3: Extreme temperatures) may affect the species both directly by lowering its survival chances and indirectly by increasing the frequency of wildfires (threat 7.1.1: Increase in fire frequency/intensity).

Legally: the species is included in Appendix I of the Bern Convention and as a priority species in Annexes II and IV of the 92/43 EC Habitats Directive. Also the habitat characterized by its presence (9220 = Apennine beech forests with Abies alba and beech forests with Abies nebrodensis) is listed within Annex I of the same Directive. All the population grows within the Madonie Regional Park.

In situ: once rediscovered, foresters immediately initiated conservation measures. However, soil degradation of the natural habitat has made re-introduction very difficult. Researchers from the University of Palermo are currently investigating the ecological requirements and several reproductive traits of the species. The species has grown well in several European botanical gardens. Several actions of the EU LIFE-funded project LIFE2000NAT/IT/7228 (2001-2005) and of another nationally funded project (CIPE = Comitato interministeriale per la programmazione economica) have been carried out in order to reinforce the extant population, to restore local forest habitats, and to gradually eradicate the non-indigenous fir species. These projects had some good results on the demography of the Sicilian fir: although only 24 out of 30 adult trees are fertile, , seedlings and saplings have increased from 30 to 155.

Ex situ: in 1978, following seed collection, the Sicilian Forestry Service cultivated 110,000 young trees in a nursery. Since their survival rate proved to be extremely low, an adoption program was set up in parallel. Controlled pollination carried out during the EU LIFE-funded project has resulted in the production of an additional 3,000 plants to reinforce the existing population; unfortunately, only a few hundred of them survived. Furthermore, several mature trees grow out of the natural range of distribution of the species in private and public green areas of the Madonie Mts., elsewhere in the Province of Palermo and in the botanic gardens and arboreta of many European countries and in the U.S.A.

Considering the low sexual performance of mature individuals and the low survival rate of seedlings and saplings, grazing and trampling damages may represent a serious threat for the natural regeneration of the species. Hence, strict grazing management measures are urgently needed in order to reduce and control the impact of herbivores. Assisted colonization should be encouraged in selected areas free from non-native fir species in order to prevent genetic contamination due to hybridization. Eradication of the alien Abies species occurring in the surrounding areas has to be completed. Habitat recovery and vegetation dynamics should be regularly monitored in order to understand the response of A. nebrodensis to ongoing changes of land cover patterns.

Linares J.C., 2011. Biogeography and evolution of Abies (Pinaceae) in the Mediterranean Basin: the roles of long-term climatic change and glacial refugia. Journal of Biogeography, 38 (4): 619-630.