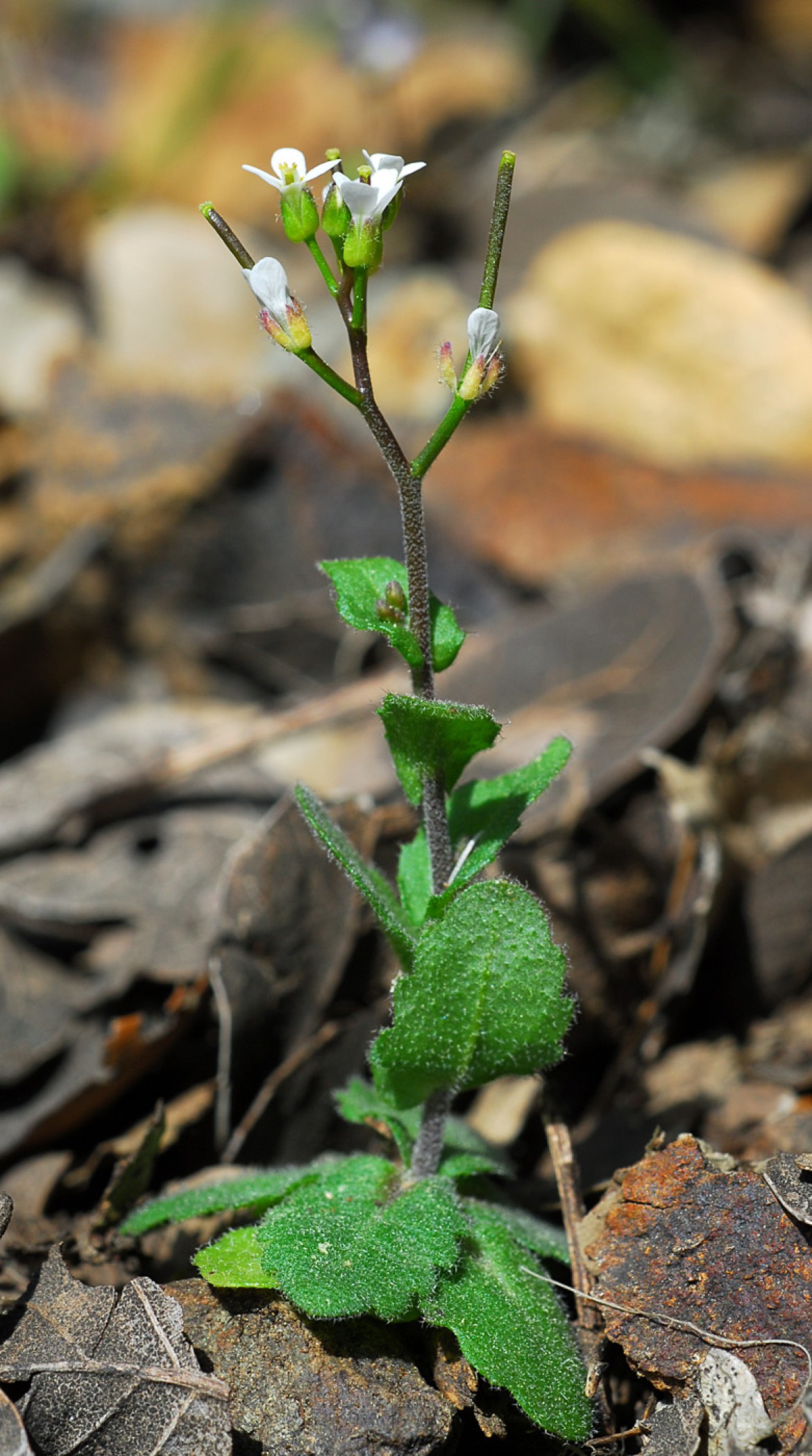 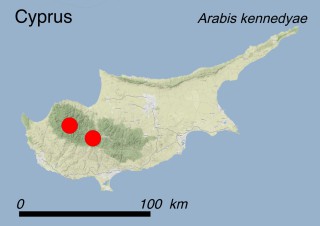 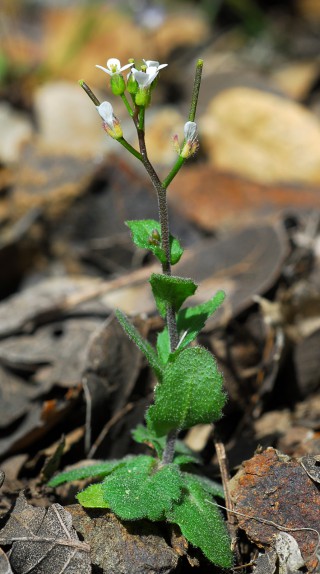 This plant grows at 1200-1400 m a.s.l. on the ophiolithic rocky slopes of the central Troodos and Tripylos mountains (Troodos range). The species is found in semi-shaded openings at the margins of Cedrus brevifolia and Juniperus foeditissima forests (habitat 1.4.3: Coniferous woodland) or in rocky streamside areas dominated by the golden oak (Quercus alnifolia) (habitat 1.4.2: Broadleaved evergreen woodland) and the Calabrian pine (Pinus brutia) (habitat 1.4.3: Coniferous woodland).

Arabis kennedyae is an annual or biennial herb with erect, often purplish stems usually less than 30 cm tall. The basal leaves are up to 6 cm long, 2 cm wide, and form a rosette. The cauline leaves are shorter than the basal ones. The flowers are small and inconspicuous with four white petals, arranged in loose bunches. The plant flowers from (March-)April to May. The fruits are 25-40 mm long and very narrow, almost looking like extensions of the branched stem. At maturity they dry up and split open into two parts that fall off, leaving an inconspicuous central membrane which supports the tiny seeds.

The annual or biennial habit of the plant probably depends on the weather conditions. In wetter years the plant can overcome the summer drought period. The seeds are dispersed either by wind or by floating along streams. Since this species is annual or sometimes biennial, population size, expressed as the total number of mature individuals in all subpopulations, as well as the size of each subpopulation, experiences significant annual fluctuation.

Taking into account monitoring data of the years 2006-2011, the species is no longer considered as CR (Critically Endangered) and should now be classified as EN (Endangered) according to IUCN Red List Criteria B1ac(iv)+2ac(iv). If we use a 1×1 km grid the AOO is ca. 5 km2 and the EOO ca. 14 km2, respectively; moreover, the number of locations is less than 5 and extreme fluctuations in the number of mature individuals have been recorded. The four known subpopulations encompass approximately 10,000 individuals (2011 census).

The direct threats which have been identified during field surveys were the development of recreation areas and activities therein at two locations, which are close to nature trails and a picnic site (threat 6.1: Recreational activities), the construction of new roads and the improvement of existing ones (threat 4.1: Roads and railroads), forest management (threat 4.2: Utility and service lines) at two locations, low to moderate frequency of human-induced fires (7.1.1: Increase in fire frequency/intensity) at all locations despite fire protection measures due to the proximity of inflammable pine forests, and the high frequency of visitors (threat 1.3: Tourism & recreation areas). All the above-mentioned factors may also represent a source of indirect threat by inducing progressive habitat loss.

Legally: This species is protected by the Bern Convention where it is listed in Appendix I, and by the 92/43 EC ‘Habitats’ Directive where it is included as a priority species in Annexes II and IV. Moreover, it is included in the Red Data Book of the Flora of Cyprus as an Endangered species. The subpopulation at Tripylos mountain, in the Cedar Valley, was designated as a Plant Micro-Reserve by a Ministerial decree in 2013, according to the Forest Legislation.

In situ: The entire population of this species occurs in Troodos National Forest Park and Paphos State Forest. All subpopulations are located within two sites of the Natura 2000 network (CY2000008 – Koilada Kedron-Kampos; CY5000004 – Ethniko Dasiko Parko Troodous). Monitoring activities took place from 2006 to 2009, within the framework of a PhD Thesis and from 2010 to 2013 within the framework of a LIFE+ project (LIFE08 NAT/CY/000453 - Establishment of a Plant Micro-Reserve Network in Cyprus for the Conservation of Priority Species and Habitats).

Ex situ: Seeds from all subpopulations are stored in the seed-bank of two institutions located in Nicosia: the Nature Conservation Unit of Frederick University and the National Seed Bank of the Agricultural Research Institute.

Based on up-to-date population data, several interventions should be undertaken in order to ensure the survival of the species by reducing or eliminating direct and indirect threats. Road construction and accidental trampling at two locations can be handled by informing the relevant authorities and by signposting for the public, while the modification of the hiking path of Kryos Potamos would allow to preserve the small local subpopulation. On the other hand, population data and habitat availability indicate an increased extinction risk due to small population size combined with large fluctuations and low genetic diversity. In situ conservation should also focus on population size enhancement and on the maintenance of forest openings. Population reinforcement by establishing new plants in the most suitable microsites is needed for the two smallest subpopulations.