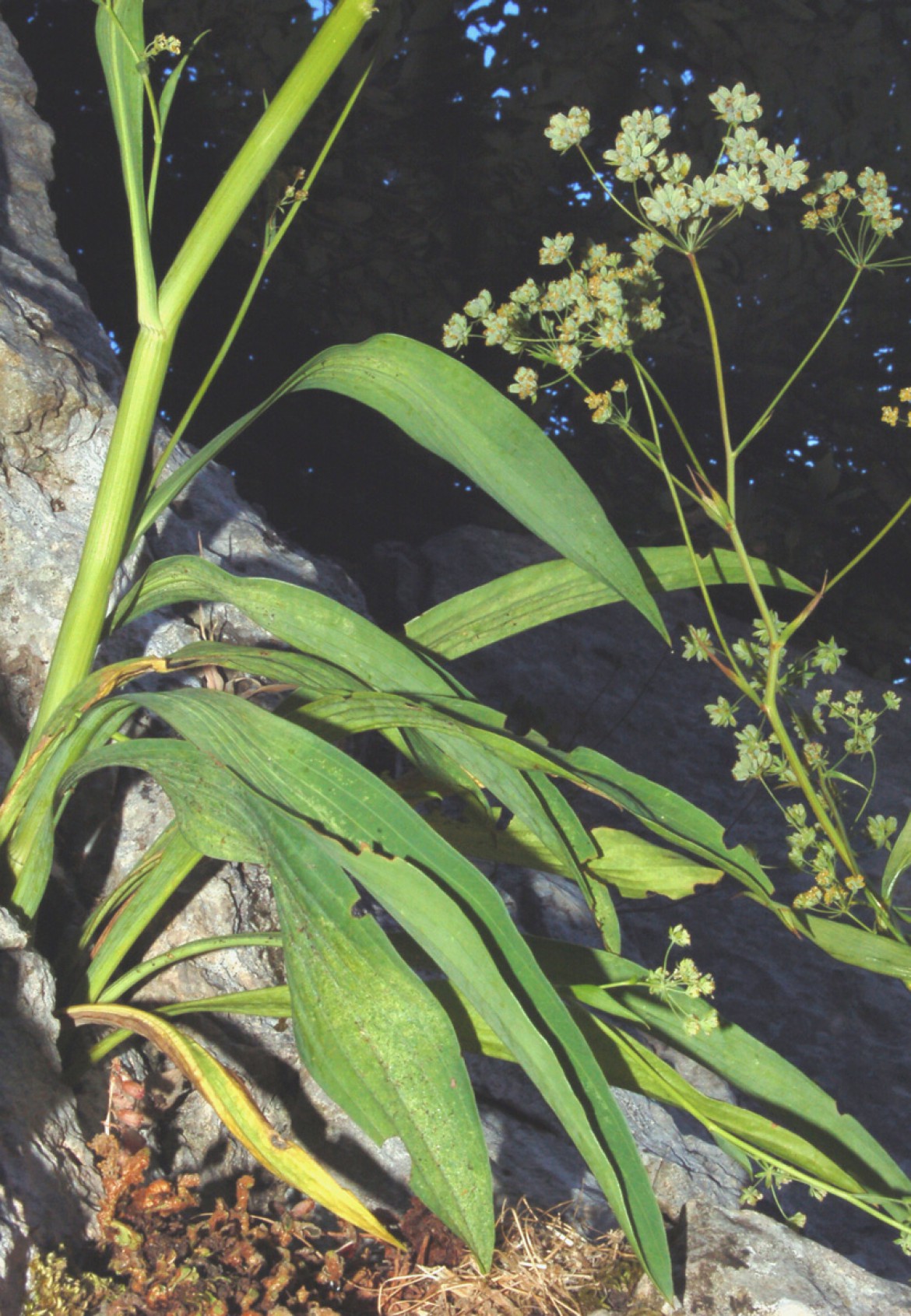 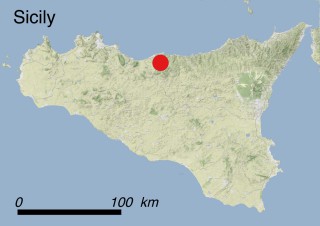 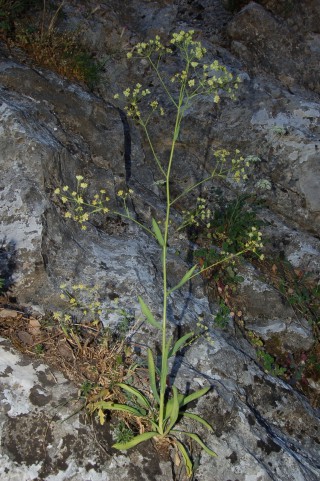 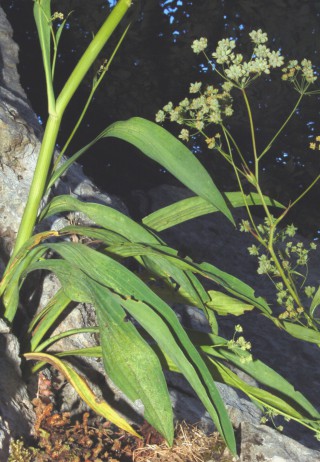 This species is endemic to the Madonie Mountains (central part of northern Sicily), where at present only two subpopulations located between 1300 and 1900 m a.s.l., are known, while several other lower ones (ca. 700 m a.s.l.) recorded by botanists during XIX century have not been confirmed later on.

The species grows on N-NW-facing rock crevices of calcareous-dolomitic inland cliffs (habitat 6.2: Inland cliffs. Rock pavements and outcrops). As both subpopulations are found in almost inaccessible sites, only a rough estimation of ca. 400-600 mature individuals, covering an area of 0.5 km2, was possible.

Bupleurum elatum is a perennial herb, up to 80-150 cm tall. The dead leaves remain for a long time at the base of its woody stem, which bears smooth long branches.

The plant starts its vegetative activity in spring. The leaves have a leathery texture; the basal ones are 15-25 mm wide and 50-90 mm long, vary in shape from arrow-shaped to spoon-shaped with 7-9 veins, and form a radiating cluster around the stem. As for many other plants growing in such habitats, its leaves show several morphological adaptations to altitude and to the mist and dew regime.

The leaves of the flower stalk are smaller and have a pointed tip. The inflorescence is an umbel composed of 6-14 rays, with (3)5-7 involucral bracts. The plant usually flowers in summer (July), while fructification occurs in late August.

B. elatum is considered a relict species issuing from an ancestor which once had a wider distribution range. The species is connected to the endemic Bupleurum group from the Betic-Rif Mountain belt, a centre of diversity for the genus.

According to IUCN Red List Criteria the species has been categorized CR (Critically Endangered) B1ab(i,iii,v)+2ab(i,iii,v) because it is severely fragmented as it occurs in just two locations ca. 2 km from each other, covering an AOO of 8 km2, where a continuing decline in terms of EOO, habitat quality and number of mature individuals is projected due to the increasing pressure of allochthonous herbivores such as wild boar and fallow deer (threat 8.1.2: Invasive non-native/alien species - Named species). Although the subpopulations of the species are located in almost inaccessible sites, the low number and the high fluctuation of mature individuals as well as the small and restricted population size represent serious threats (threat 12.1: Other threats). Furthermore, single fire events (threat 7.1.1: Fire and fire suppression - increase of frequency/intensity) may wipe out the entire offspring.

Legally: Although the species is included in the national and regional Red Lists, it is not protected by any law or convention.

In situ: Both the known subpopulations fall entirely within zone 'A' of the Madonie Regional Park, where the most protected level of protection is ensured. The same areas also belong to Natura 2000 Sites (ITA020050, ITA020004 and ITA020016) for which the management plans, aiming at the conservation of wild species and habitats, have been recently written. No further specific measures have been taken.

More research and fieldwork are needed to better understand the present distribution and the reproductive performance of this species, as well as the reasons for its decline in the wild during the last centuries. Factors inducing changes in ecological processes and in the vegetation patterns and dynamics, such as wildfires and overgrazing, need to be reduced.