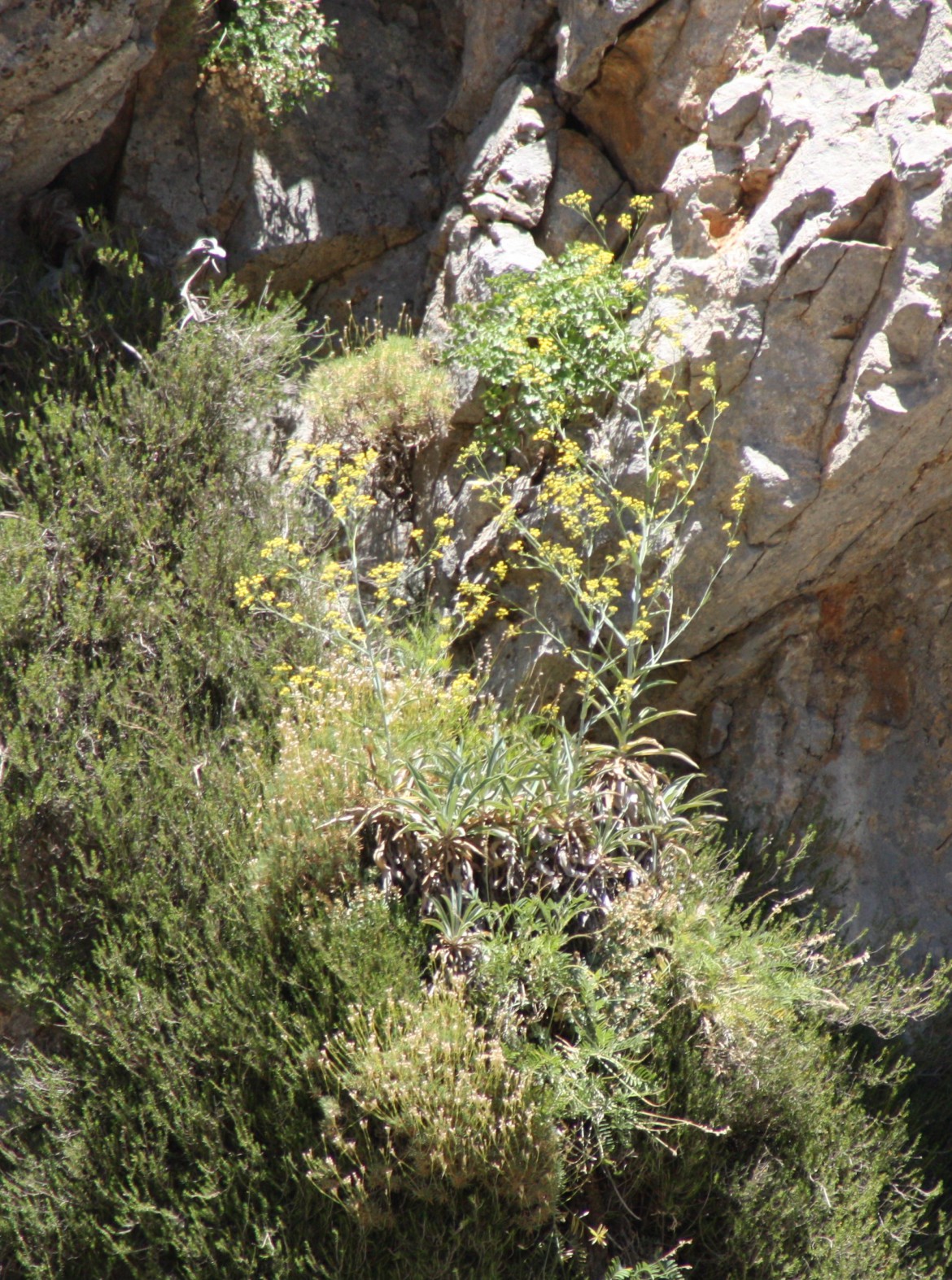 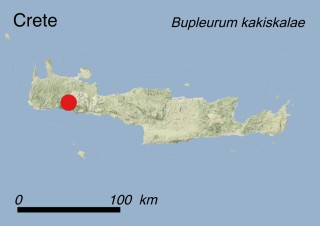 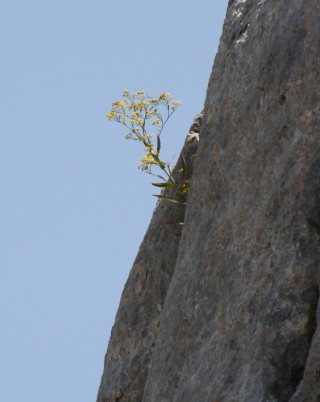 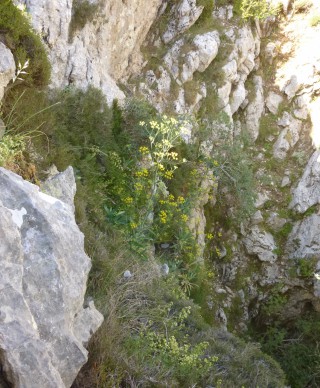 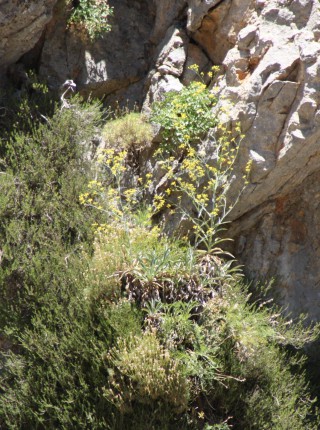 Endemic to the island of Crete, Bupleurum kakiskalae occurs in the mountain range of Lefka Ori on the cliffs of five distinct localities, i.e. Kakiskala, above the gorge of Samaria, Melintaou, on Avlimanakou summit, near Athimolakkos and on Zaranokefala summit, above the gorge of Eligia. B. kakiskalae seems to have very strict ecological requirements; in fact, all populations grow between 1450 and 1850 m a.s.l. and are only found on cliffs (6.2: Inland cliffs, rock pavements and outcrops) made of a particular type of metamorphic limestone.

During most of its life, this perennial species produces only leaves, which form a basal rosette of about 15-30 lanceolate leaves approximately 10-25 cm long. After 10-15 years of vegetative life, mature plants form a single stem up to 1 m in height. The stem supports one umbrella-shaped inflorescence consisting of small yellow flowers that open between June and July. After having flowered and produced fruit, the plant dies.

More intense field surveys carried out during last 10 years led to the discovery of four new subpopulations between 2007 and 2015. In three localities (Melintaou, Avlimanakou and Zaranokefala) most of the plants occur on inaccessible cliffs and can be observed only with a telescope or binoculars. Considering that a very low number of individuals are found in the wild and that the plant flowers only once during its lifetime, only few individuals flower each year (estimated between 50 and 300, depending on the year). Therefore, yearly seed production and seedling establishment is extremely variable.

Taking into account new available information issuing from recent field surveys, the species is no longer considered as CR (Critically Endangered) and should now be categorized as Endangered (EN) according to IUCN Red List Criteria B1ac(iv)+2ac(iv). This is justified from the fact that B. kakiskalae occurs in 5 distinct locations in a single massif (Lefka Ori), using a 2×2 km grid its EOO is 41.2 km2 and its AOO is 20 km2. Additionally, the number of mature individuals presents extreme yearly variations, as depending on the year, between 20 to 200 flowering plants have been observed in the same population. The main threats affecting the survival of B. kakiskalae are the low probability of genetic exchange within the same population due to the small number of individuals flowering at the same time (threat 12.1: Other threats), and cliff instability, as the substrate on which it grows is subject to periodical collapses (threat 10.3: Avalanches/Landslides). Browsing by goats (threat 8.1.2: Invasive non-native/alien species - Named species) and seed gathering by rare plant collectors (threat 5.2.1: Gathering terrestrial plants - Intentional use) may represent a threat for the few accessible individuals.

Legally: B. kakiskalae is included as a priority species in Annexes II and IV of the 92/43 EC ‘Habitats’ Directive and in Appendix I of the Bern Convention. The species is also protected by the Greek Presidential Decree 67/81. All populations enjoy indirect protection as they fall within the Natura 2000 site GR4340008 ‘Lefka Ori kai paraktia zoni’.

In situ: a plant microreserve of 1 ha for the species (in the Kakiskalo area) has already been established in the framework of the Cretaplant project (LIFE04NAT_GR_000104, 2004-2007). The setting up of microreserves ensures long-term monitoring activities on the local plant population and the effective protection of its habitat. Moreover, the project itself improves the awareness of local people, land-owners and users on the importance of nature conservation. As B. kakiskalae is listed as a priority species in Annexes II and IV of the 92/43 EC ‘Habitats’ Directive, it is included in a 6-year cycle national monitoring program (funded by the EU and national resources) for the assessment of its conservation status.

Ex situ: A few specimens are cultivated in the forest nursery of Xyloskalo managed by the Forest Directorate of Chania. Seeds are stored in the seed bank of the Mediterranean Agronomic Institute of Chania in Crete.

Studies on the biology and ecology of this species must be continued to properly define the needed conservation measures. Additional fieldwork should be encouraged to determine whether any other populations exist. Regular collection of seeds should be made in order to conserve the entire genetic pool of the species. The accessible plants should be better protected from wild goats and from plant collectors.