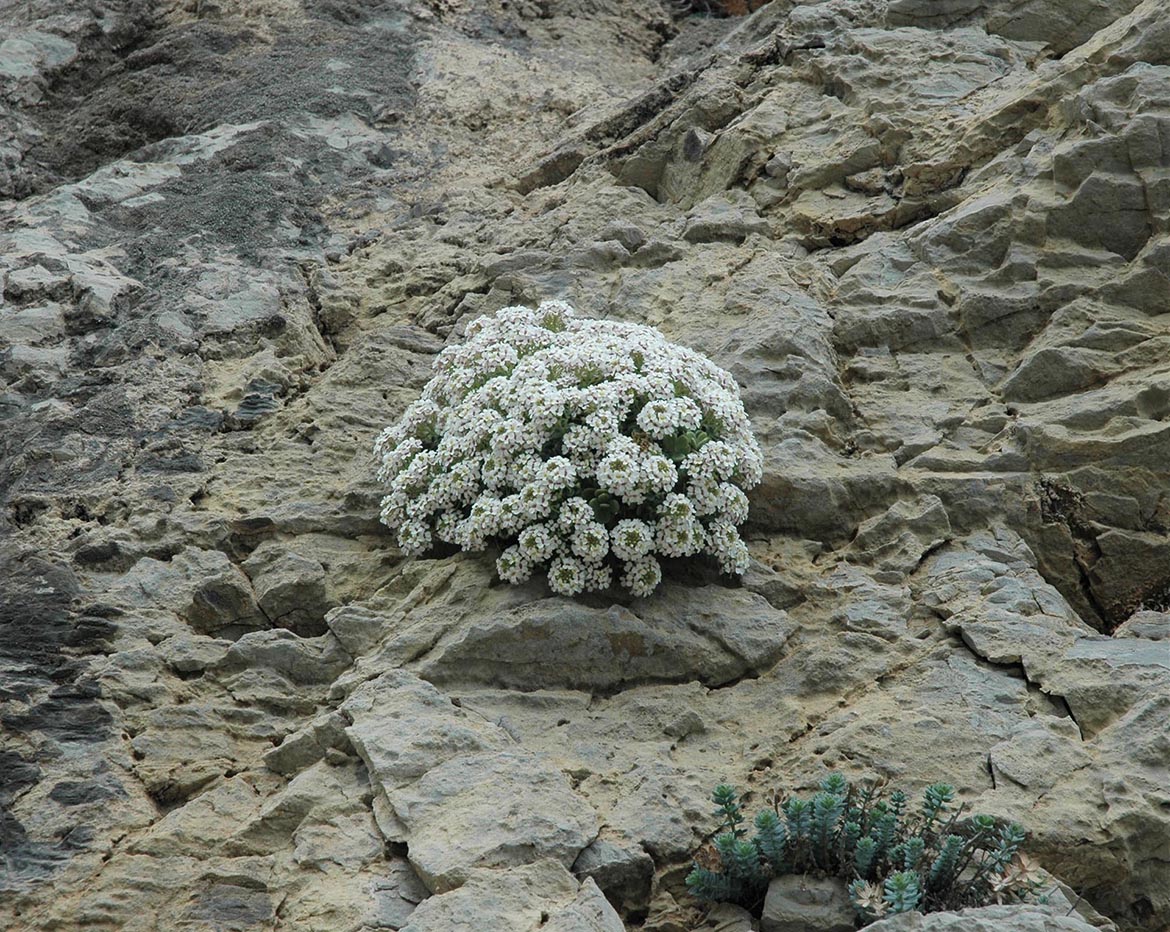 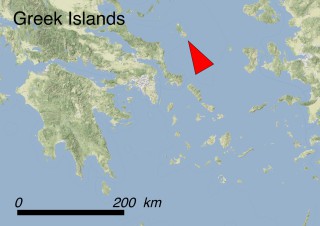 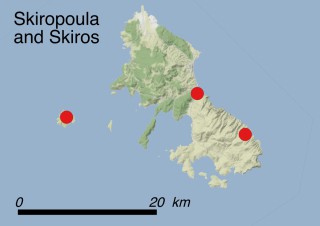 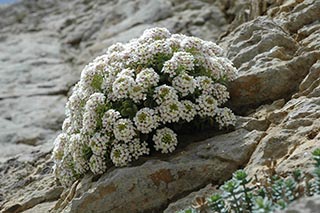 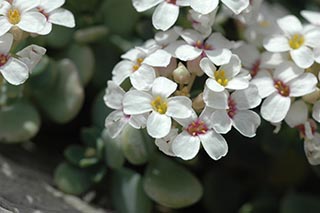 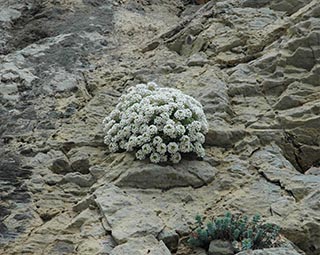 This species is only known to occur on the island of Skiros and on the northern part of Skiropoula, a satellite islet located approximately 4 km southwest of Skiros. As concerns Skiros, three populations (represented by 51 mature individuals in total) are known, and the plants are localised on the steep NE-facing limestone cliffs of Mt. Kochilas and at Cape Korakia. At Skiropoula there is one subpopulation, whose size has not been recently assessed. Aethionema retsina is mostly found within 0.5 km of the seashore and grows in small crevices and shady habitats located between 10 and 200 m a.s.l. (habitat code 6.2: Inland cliffs, rock pavements and outcrops).

A. retsina is a shrubby perennial that forms cushions up to 20 cm tall and 40 cm wide. Its woody base can be up to 20 cm thick (i.e. as thick as the length of the shoots). The base of the plants produces several shoots per year and the plants bear smooth, broad, somewhat fleshy leaves 10-15 mm long and rounded at the end. Each young shoot usually bears at its upper end an inflorescence of 25-50 slightly asymmetric white flowers. The petals are up to 3.5 mm long and have a purplish tinge when young. The fruits are flat capsules less than twice as long as wide, called silicles. They are framed by a notched wing from which the style sticks out. Each fruit only contains one lens-shaped seed.

This species was only discovered in 1969 and published in 1973. It is typical to a particular litho-halophilous plant community adapted to grow in the rocky cracks of seashore cliffs. The fleshy habit of the plant is an ecological adaptation to salt spray and a common trait for many coastal plants. Several cross-breeding experiments between A. retsina and other Brassicaceae of high agricultural importance, such as cabbage, canola and mustard, have already been carried out. These experiments aim at the genetic improvement of crop species by transferring some interesting traits found in Aethionema retsina (e.g. salt tolerance and drought resistance). Mature individuals produce numerous seeds, which germinate easily and at high percentage between 10 and 20 °C. The name of the species originates from the name of a traditional Greek wine (retsina): it seems that the botanists who discovered the species were ‘inspired’ by the bottle that was used to carry the original plant sample.

This species has been categorized as CR (Critically Endangered) according to IUCN Red List Criteria B1ab(iii,v)+2ab(iii,v). This is because the area of occurrence of the species is extremely small and fragmented, and prone to severe grazing pressure due to the increasing numbers of goats which severely damage plants during their flowering and fruiting stages.

Due to the small size of the islands, shepherds do not need to fence the territory to keep their herds together, hence goats have free access everywhere. Like all plants with no effective grazing protection (poison, spines, etc.) A. retsina is selectively eaten by goats because of its high nutritional value. Another potential threat is represented by limestone quarrying (threat 3.2: Mining and Quarrying), and other works such as the construction of new roads (threat 4.1: Road and railroads) and wind farms (threat 3.3: Renewable energy); in fact, the construction of a massive wind farm consisting of 111 turbines on Mt. Kochilas was stopped by conservationists and the local community in 2013. A. retsina is threatened with grazing, browsing and trampling damages due to local sheep and goat herds (threat 2.3.2: Small-holder grazing, ranching or farming).

Legally: This species is not included in any international convention or national legislation. Due to bureaucratic problems, it has not even been included in the list of protected Greek species according to the 92/43 EU Directive. Mt. Kochilas, where 2 of the subpopulations of A. retsina occur, has been declared a NATURA 2000 site GR2420006 “Skyros :Oros Kochylas”, while the islet of Skiropoula falls within the boundaries of NATURA 2000 site GR2420009 “Nisides Skyrou”.

In situ: During the implementation of the LIFE project SKYROSBIODIVERSITY (LIFE09 NAT/GR/000323), some conservation efforts were focused on the species. The location of Korakia, where one of the A. retsina population occurs, was delineated as Plant Micro-Reserve for the endemic flora of Skyros. A simplified monitoring plan for the species was carried out, while a pilot action of reinforcement with human-assisted dispersal of seeds in suitable rock crevices showed encouraging results for a possible larger scale application in the future. Moreover, increased concern was raised in the local community and the visitors about the endemic flora of Skyros, through public information events, leaflets, information boards, etc.

Ex situ: At least 3 seed lots (collected during different years) from the subpopulation of Korakia are stored in the Seed Bank of the Faculty of Biology of the National and Kapodistrian University of Athens. Unfortunately, the collection of seeds from the other populations has been so far impracticable due to limited accessibility of the corresponding sites and/or of the fruiting individuals. Some individuals of this plant are cultivated at the botanical gardens of Copenhagen (Denmark) and of Lund University (Sweden). However, they do not account for the entire gene pool of the species because seeds have only been collected from a few plants.

In situ: The priority should be to protect the species from grazing. The areas where it grows should be fenced and managed to keep grazing animals out. Both the large NE-facing cliffs of Mt. Kochilas and the N-facing cliffs of the islet of Skiropoula should be designated as nature reserves. Moreover, stone quarrying and plant collection should be prohibited.

Ex situ: A. retsina is easy to cultivate and has a high potential as an ornamental plant. It should be propagated and planted in other suitable shaded rocky sites, following IUCN/SSC Guidelines for re-introductions which include guidance on benign introductions. Further efforts should be made in order to collect seeds from all populations in order to be able to conserve the entire genetic pool of the species and to carry out re-enforcement interventions where and when needed.