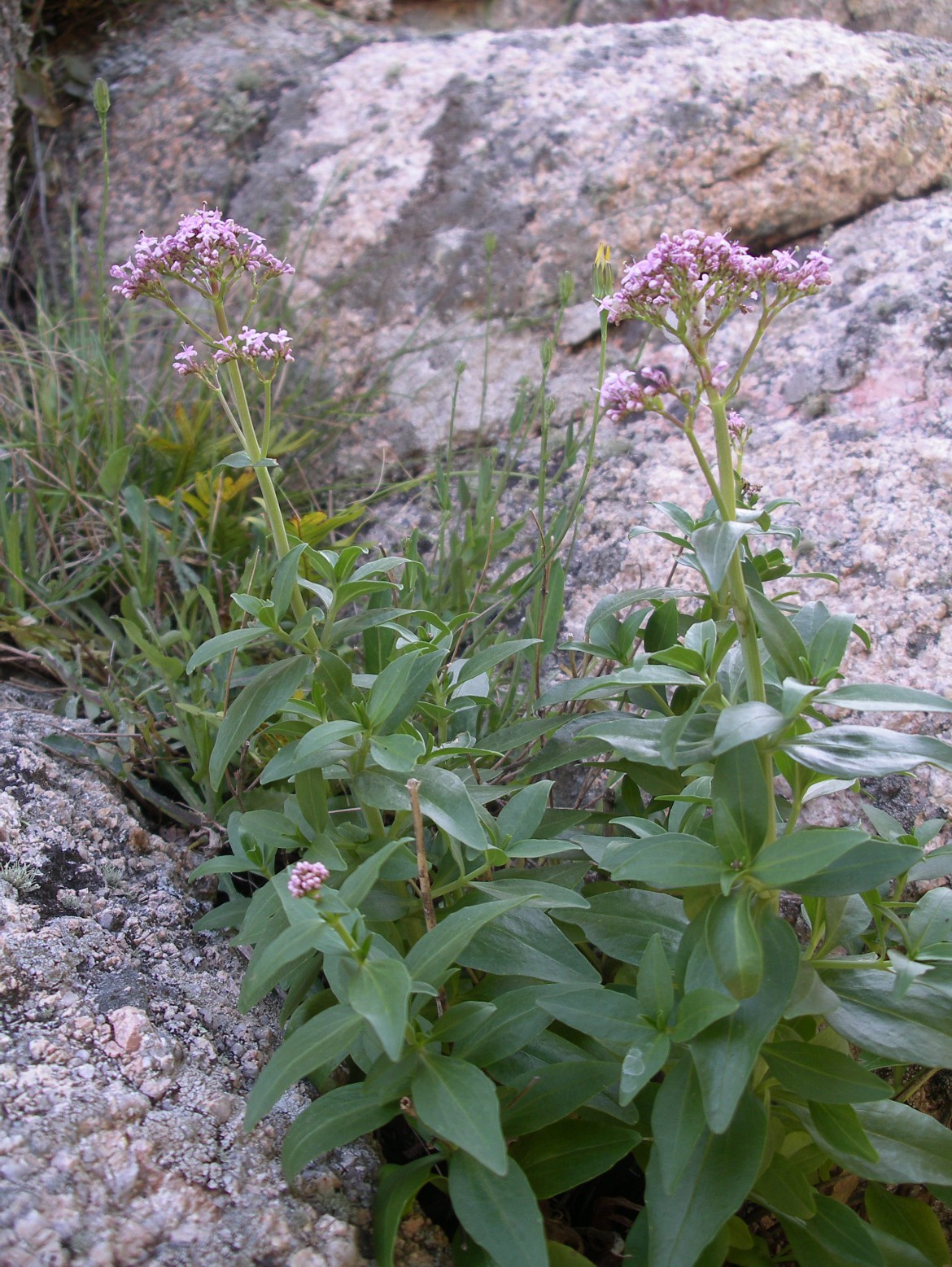 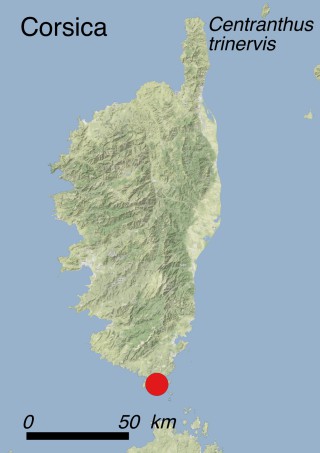 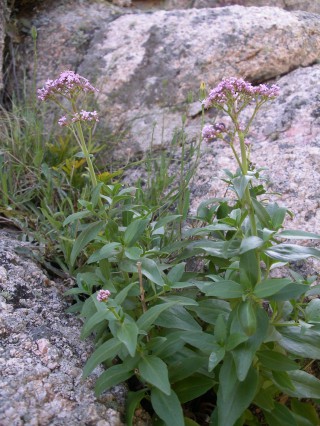 Centranthus trinervis is endemic to SW Corsica. Up to now, only one population of less than 120 individuals (98 mature and 20 saplings: census June 2016) is known, located between 140 and 170 m a.s.l. on the granitic massif of Trinité (Bonifacio municipality), 1 km away from the coast. Centranthus trinervis is a rupicolous plant growing in rock crevices and on ledges of shady N-facing cliffs (habitat 6.2: Inland cliffs. Rock pavements and outcrops).

Centranthus trinervis is a perennial caespitose plant, woody and thick at the base, which produces every year several new erect stems, 20 to 60 cm tall, ribbed, hollow, simple or slightly branched. The shimmering leaves are opposite, entire, spoon- to arrow-shaped, 4-9 cm long and 1.5-3.5 cm wide, with three parallel venations, the lower leaves are petiolate, the upper ones sessile. The small (<5 mm long) flowers are pale pink or white, arranged into cymes, which in turn form a corymbiform panicle at the apex of the stems. The calyx tube is fused with the ovary; the corolla is gamopetalous and composed of a small (4 mm long) tube bearing a basal bump and 5 slightly uneven lobes; the flowers host one single protruding stamen. The fruit is glabrous, indehiscent, pear-shaped, 2.5-3 mm long and is dispersed by wind. Flowering occurs in May and June.

A very close relative, Centranthus amazonum Fridlender & Raynal-Roques, is strictly endemic to Sardinia and can be easily distinguished from C. trinervis by having glaucous and narrower leaves and longer fruits. Moreover, the two species occupy different habitats (limestone around 1200 m a.s.l. for C. amazonum and granite around 150 m a.s.l. for C. trinervis) and have a different flowering time (June-July for C. amazonum).

All the above ground organs dry out at the beginning of the summer season and may be blown away during violent autumnal windstorms. The plant is able to promptly re-sprout after wildfires. Although fruits appear to be perfectly adapted for wind-dispersal, no colonization cases have ever been recorded outside its narrow distribution range except for a single individual observed at the base of the cliff in June 2016.

The Corsican Regional Red List (2015) includes Centranthus trinervis in the category EN (Endangered). However, the species is considered as CR (Critically Endangered) according to the IUCN criteria: B1ac(iv)+2ac(iv); C2b, because it is represented by a single population of less than 200 plants and the number of mature individuals appears to be extremely fluctuating. Moreover, using a grid of 2×2 km, both the AOO and the EOO are 4 km2.

Several co-occurring natural and anthropogenic factors may cause the extinction of the species in the wild, such as the competition of the evergreen liana Smilax aspera (threat 8.2.2: Problematic native species/diseases - Named species), cliff erosion (threat 10.3: Avalanches/landslides) or extreme drought events (threat 11.2: Droughts). Even if wildfires (threat 7.1.3: Fire and fire suppression - Trend unknown/unrecorded) could induce short-term opening of local plant communities, they may also kill some individuals of C. trinervis. Additionally, many plants have been killed in several places due to sport activities carried out by a private free-climbing club of Bonifacio (threat 6.1: Recreational activities).

The recent development of a touristic resort (threat 1.3: Tourism & recreation areas) and of a housing estate (threat 1.1: Housing and Urban areas) threaten the only population by favouring the spread of invasive species such as Cortaderia selloana (threat 8.1.2: Invasive non-native/alien species - Named species) and other alien plants cultivated for ornamental purposes. The possible introduction of Centranthus ruber for the same purposes could induce hybridization (threat 8.2.2: Problematic native species/diseases - Named species), with dramatic effects on the endemic C. trinervis.

Legally: the species is strictly protected at a national level in France and is listed within the Red Book of the Endangered Flora of France (Livre Rouge de la flore menacée de France). At an international level it is included within Annex I of Bern Convention and in Annexes II and IV of the 92/43 EC ‘Habitats’ Directive.

An ad hoc National Action Plan has been written down. This document provides an overview on the species’ ecology, distribution and status, outlines some tools for its protection, summarizing the best practices and the most effective strategies for its long-term conservation. Unfortunately, it has not yet been published by the French Ministry of Environment.

In situ: since 1997 the purchase of part of the site hosting the population of Centranthus trinervis by the Conservatoire du Littoral (CdL) favoured its protection. The perimeter of the Natura 2000 site FR9400592 “Ventilegne - La Trinité de Bonifacio - Fazzio” partially overlaps with the cliffs of la Trinité, hosting some other individuals of the species.

Several field monitoring actions focused on C. trinervis have been carried out by the Conservatoire Botanique National de Corse and the Parc Marin International des Bouches de Bonifacio, appointed to manage the property of the CdL. Additionally, since 2008 and 2011 free climbing activities on the cliffs of la Trinité hosting C. trinervis are forbidden.

The actions to be undertaken are: (1) to go on with a regular and punctual follow up of the population, (2) to complete the acquisition initiatives started by the CdL in order to obtain the full property of the site hosting Centranthus trivervis, (3) to investigate the short and long-term effects of wildfires, cliff erosion, extreme drought events and natural vegetation succession (e.g. by opening activities in experimental plots), (4) to improve the knowledge on the biology and demography of the population (seed dispersal strategy and efficiency, rate of seedling survival, suitable habitats for new colonization, etc.), (5) to carry out reinforcement and assisted colonization activities using in situ seed collections and plants propagated in the above mentioned botanical gardens, (6) to improve the awareness of the local community and climbing associations on the importance of local plant heritage and its conservation needs.