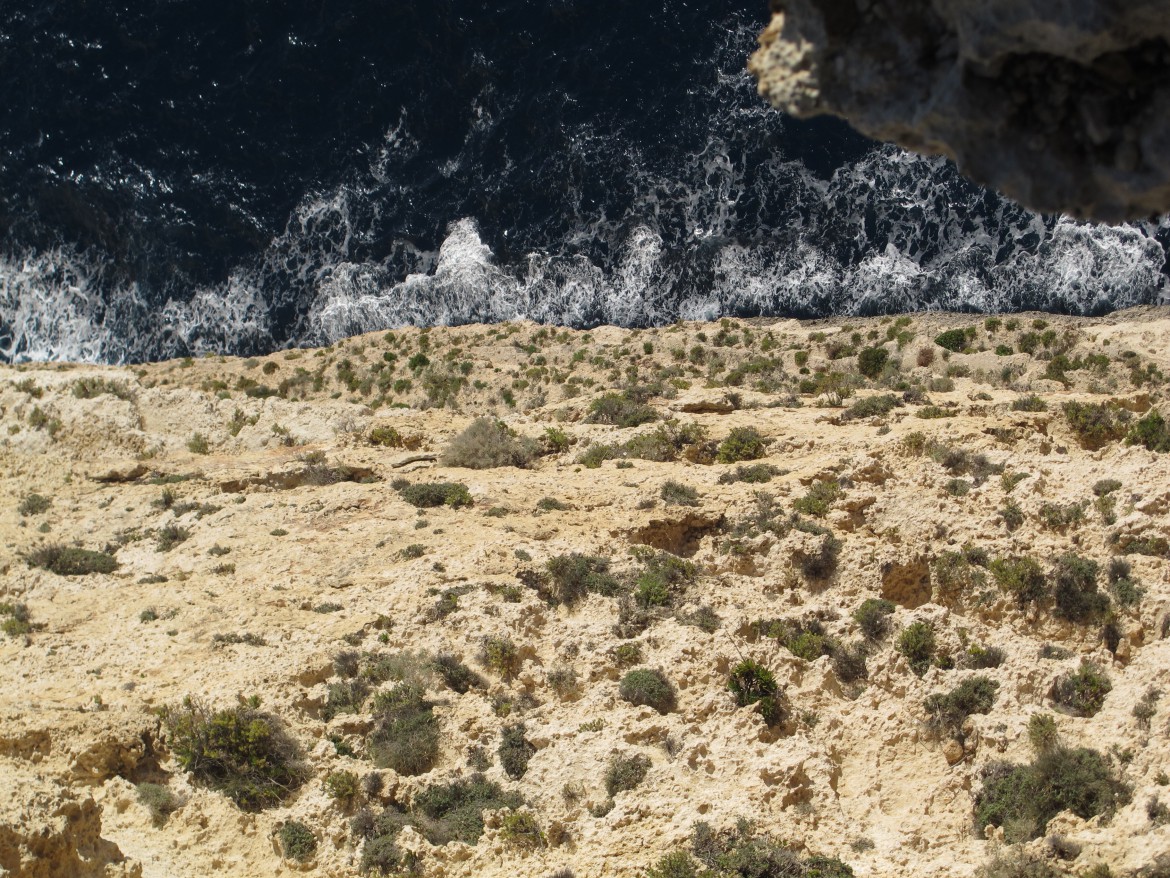 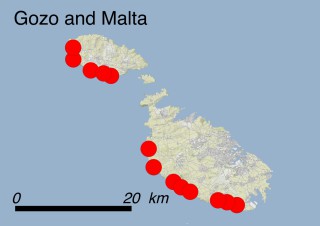 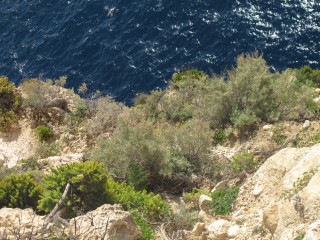 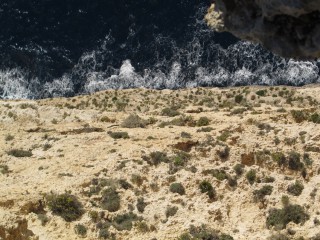 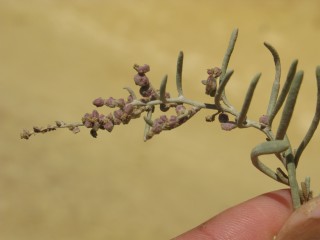 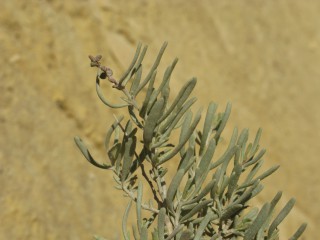 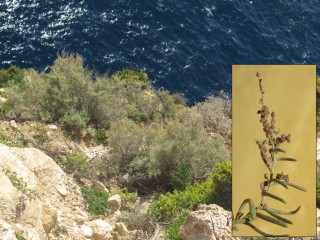 Cremnophyton lanfrancoi is a rupicolous shrub growing on vertical coastal limestone cliffs (habitat 13.1: Sea cliffs and Rocky Offshore Islands) along the south coast of mainland Malta and the southern and western coasts of Gozo, including Ħaġret il-Ġeneral (the Fungus Rock Nature Reserve). In a few locations, this species also colonizes the plateaus over the cliffs and extends up to 100 m inland.

The Maltese cliff-orache is an evergreen, perennial, multi-branched shrub reaching up to 80 cm in diameter. The leaves are silvery-green, narrow-elliptical, up to 5 cm long, somewhat fleshy and hence adapted to absorb and retain air moisture. The inflorescences are variable, but usually form sparse branches with numerous small inconspicuous flowers blooming between August and September. The fruits ripen in November: they are small achenes, enclosed in flattened lanceolate to rounded bracts, initially pale green then turning deep purple-red and form small appendages acting like wings to facilitate wind dispersal.

This species has several traits which are considered ‘primitive’ in an evolutionary perspective, such as an unusual chromosome number of 10 rather than 9 like all other species of the genus Atriplex. It probably represents a relict element of the Tertiary flora like some other chasmophytic endemics. In earlier works, it was confused with Halimione portulacoides, a smaller marshland plant that is also present on the Maltese Islands. Old and not confirmed records on the occurrence of Atriplex mollis on the Maltese Archipelago may perhaps be referred to this species.

The species represents the exclusive host plant for the gall midge, Asphondylia scopuli (Diptera: Cecidomyiidae), an insect which also is endemic to the Maltese islands. Asphondylia scopuli induces fleshy spherical bud galls of about 4-5 mm in diameter in the leaf axils of Cremnophyton. The larvae of this gall midge are in turn affected by two chalcidoid parasitoids which are mainly associated with A. scopuli on Cremnophyton lanfrancoi, i.e. a still unidentified species of Eurytoma (family Eurytomidae), probably endemic, and Mesopolobus melitensis (family Pteromalidae), also endemic to Malta.

C. lanfrancoi was previously categorized as CR (Critically Endangered) and has now been downscaled to EN (Endangered) according to IUCN Red List Criteria B1ab(i,ii,iii,iv)+2ab(i,ii,iii,iv). The EOO is almost 160 km2 and the AOO is 64 km2 entirely represented by a rupicolous population scattered along the southern and western coast of Malta and Gozo in five main subpopulations: two in Gozo (Dwejra and Sannat) and three in Malta (Rabat, Dingli and Żurrieq-Birżebbuġa), each extending by 2 km or more. The re-assessment of the risk level has taken into consideration exhaustive field surveys carried out by the Environment Protection Directorate and some recently published records. On the other hand, some subpopulations recorded in the past such as those of San Pawl il-Baħar and Mistra, have not been seen for several decades and should be considered as extinct.

A major threat is the rare event of an earthquake (threat 10.3: Avalanches/Landslides) which may result in a massive collapse of coastal cliffs, although this stochastic event is unlikely to eradicate the entire population at once. Localised collapses of cliffs by marine erosion seem to be minor threats because new cliff faces are likely to be repopulated by neighbouring plants, but one has to take into account the low regeneration of this species namely due to the aforementioned gall formation due to Asphondylia scopuli (threat 8.2.2 Problematic native species/diseases - Named species).

Legally: Internationally, this species is listed in Annexes II and IV of the 92/43/EEC Directive as a priority species, and in Appendix I (Strictly Protected Flora) of the Bern Convention. The species co-occurs on local cliffs and boulder screes (the so-called rdum) together with several other Maltese endemic and sub-endemic plants. The majority of the areas occupied by this habitat type is protected as part of the EU Natura 2000 Network. Nationally, Cremnophyton lanfrancoi is protected by 92/43 EU Directive Regulations, 2006 (Legal Notice 311 of 2006 as amended). All cliffs on Malta and some cliffs on Gozo are also protected and/or scheduled in terms of environmental and/or spatial planning legislation, either as Special Areas of Conservation, Special Protection Areas, Sites of Scientific Importance and/or Areas of Ecological Importance. The islet known as Ħaġret il-Ġeneral (Fungus Rock), where this species is reported to occur, is a Nature Reserve where access is forbidden, except for valid scientific reasons.

In situ: The species is part of the Surveillance and Monitoring Programme of the Environment and Resources Authority, aiming at assessing the conservation status of the species at regular intervals by checking the trends of the distribution range of the populations and the quality of the habitat occupied by the species, as well as ongoing pressures and threats and their intensity. Reports summarising the assessments above are produced every six years.

Management plans for the protected areas where this species occurs have been approved by the Authority responsible for environment protection in Malta; such management plans also include specific actions targeting this species and its habitat. Some of these sites were also subject to EU funding, through EAFRD and LIFE Project although the funding was not directly focused on this species, but on the sites where it lives or on other co-occurring species (like seabirds).

Moreover, activities, plans and projects affecting the area of occupancy of the species within Natura 2000 sites are subject to environmental impact assessment procedures as detailed by 92/43 EU Directive Regulations on behalf of the Environment and Resources Authority.

Ex situ: This species has been propagated by laboratory methods as part of a joint research programme with the Department of Biology of the University of Malta and the former Environment Protection Department (now the Environment and Resources Authority) and is available to local nurseries and gardeners. Such ex situ material is also easily propagated by cuttings.

This species is essentially confined to non-accessible parts of the cliffs, and is readily accessible only in a couple of spots throughout its range. Hence, since most of the cliffs fall within a Natura 2000 site and the species is legally strictly protected, the most effective conservation measures needed are to ensure better compliance and enforcement of the legislation, particularly in relation to quarrying activities, land reclamation, and illegal dumping; as well as the provision of funds to enable an appropriate implementation of the management plans; in this respect, eradication and/or control of invasive alien species acting as threats to this species should be promoted further, with urgent measures to be taken against further invasion of Agave, Opuntia and Carpobrotus spp. The enlargement of existing protected areas may also be considered by the Environment and Resources Authority to cover the entire distribution of this species in Gozo.