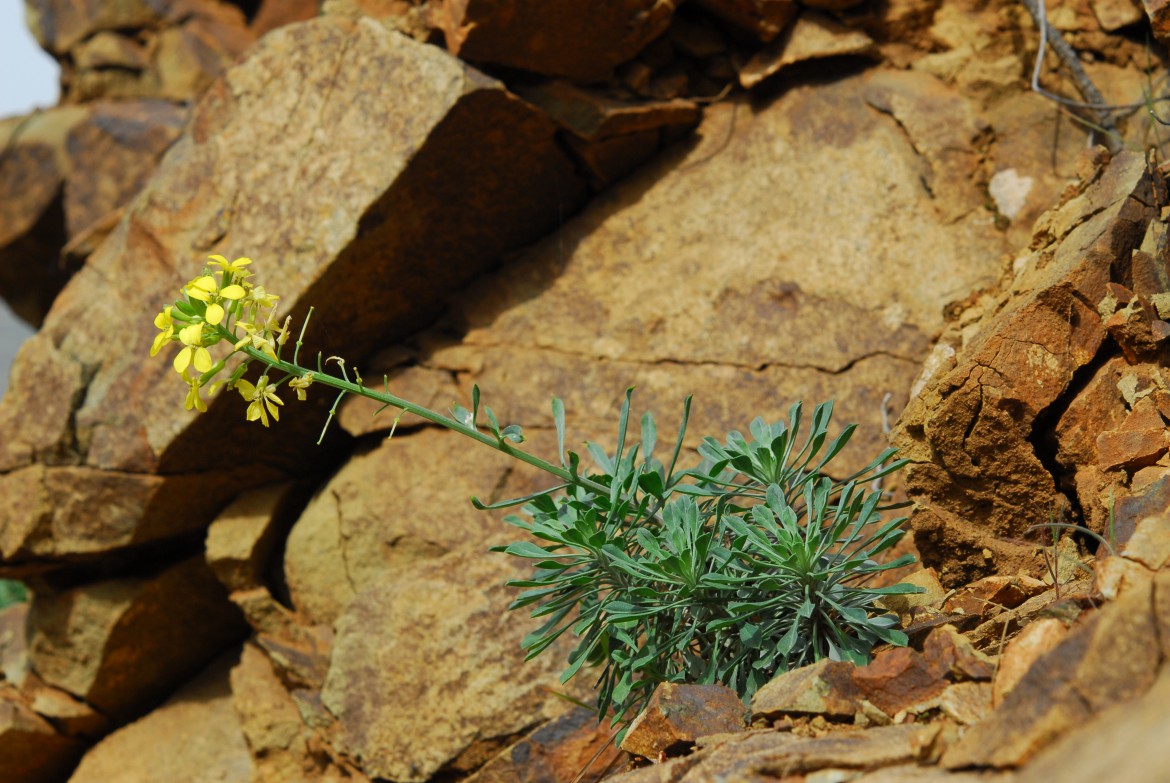 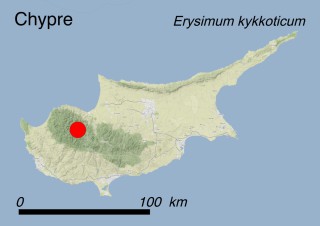 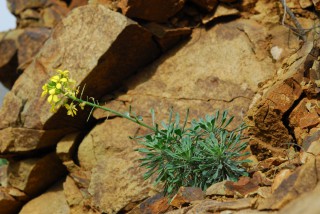 Erysimum kykkoticum is one of the rarest endemics of Cyprus. It is found in the valley of the Xeros River within the Pafos Forest, in the western part of the Troodos Mountain range. It grows in the crevices of igneous rocks or sometimes on vertical banks of abandoned forest tracks, usually facing East or North, at an altitude of 350-470 m a.s.l. The wider area is characterized by steep slopes and vertical cliffs (habitat 6.2: Inland cliffs. Rock pavements and outcrops) with open Pinus brutia forest and scattered Quercus alnifolia shrubs.

E. kykkoticum is a glaucous-green woody perennial (= subshrub) growing up to 15-70 cm tall. Its old stems display prominent leaf scars. Its leaves are spoon-shaped, 2-6 cm long, and covered with flattened hairs. Flowering and sterile shoots are also hairy. The flowers start out densely packed together in the inflorescence and later on form a loose bunch of yellow flowers. The petals are 12.5-14 mm long and slightly hairy on the outside. After flowering an upright, straight or slightly curved, laterally compressed hairy fruit 4.5-8 cm long is produced, containing tiny (4-5 mm) oblong seeds. The flowering period begins in mid-March and lasts until mid-May, while the fruiting period lasts from June to July.

The specific epithet of the plant was named after the Kykkos monastery, because the plant occurs in its surroundings.

Evolutionarily speaking, E. kykkoticum bears many ancestral traits and represents a primitive taxon within the genus Erysimum, being most closely related to the Erysimum cheiri group. As it is a large plant, it can be confused with some co-occurring species of Euphorbia or Matthiola which also grow on rock cliffs. However, it is easily distinguishable from Euphorbia or Matthiola spp. because its leaves are larger and clearly spoon-shaped.

Erysimum kykkoticum is no longer listed as CR (Critically Endangered) and should be better categorized as VU (Vulnerable) according to IUCN Red List Criteria D1+2. The total population size is around 1000 individuals (2007 census) and is confined to only one location. Using a 1×1 km grid, the AOO and EOO for the species are both 2 km2. No documented decline of population size or extreme fluctuations of mature individuals have been observed. Currently the major threat for the survival of the species are repeated forest fires (threat 7.1.1: Fire and fire suppression - Increase in fire frequency/intensity).

Legally: This species is listed in the Red Data Book of the Flora of Cyprus as Vulnerable. It has also been proposed to be included in the Appendix I of the Bern Convention, as strictly protected flora species.

In situ: The entire population of this species occurs within the Paphos State Forest and within the Natura 2000 site “Koilada Kedron-Kampos” (CY2000008).

Ex situ: No measures have been taken yet.

In situ: More research is needed to monitor population dynamics of this species including its biology and ecology, so that better management measures can be drawn up.

Ex situ: The plant should be brought into cultivation in botanical gardens, and seeds should be collected and stored in seedbanks.