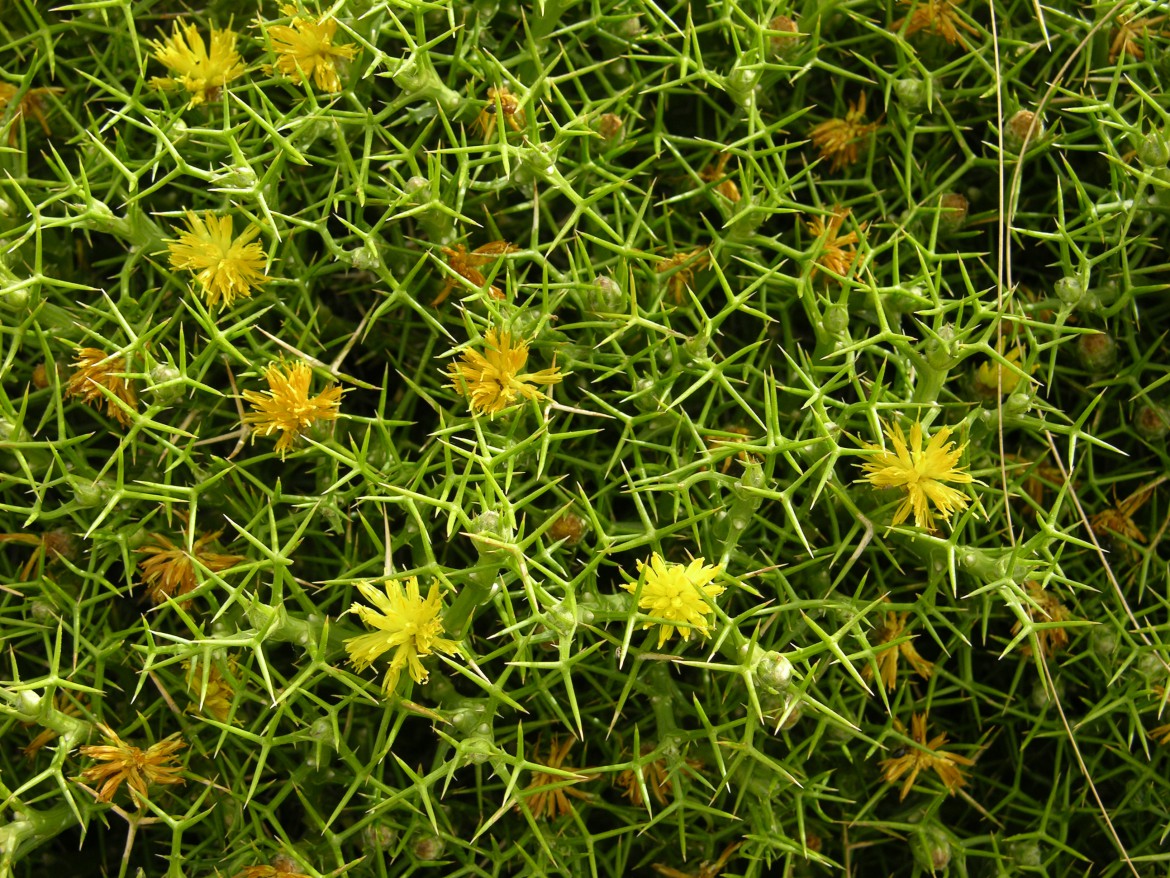 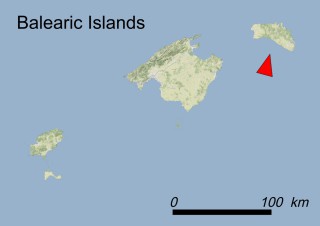 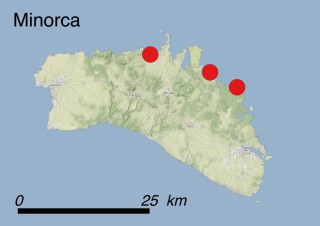 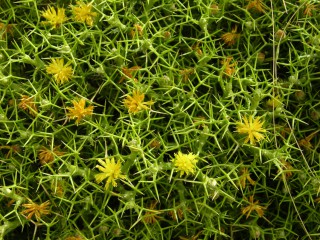 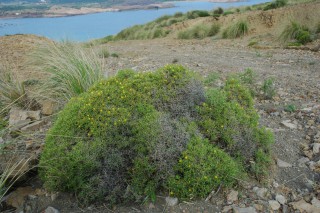 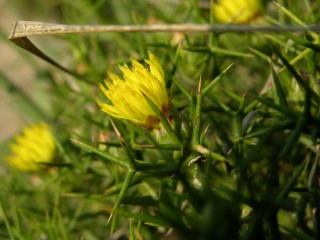 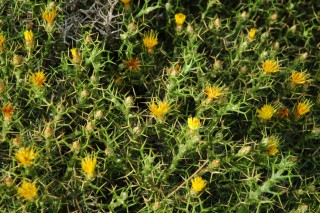 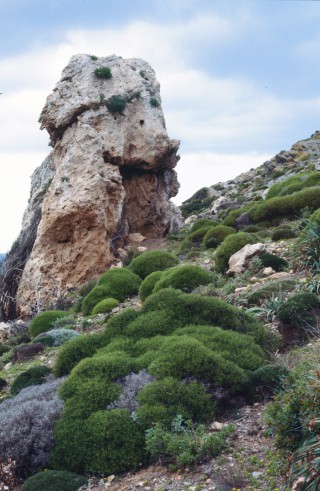 Endemic to the Balearic Islands, F. balearica occurs in three areas in the north of Minorca, i.e. Favàritx, Cala Mica-Binimel·là and Fornells-Tirant. It is a coastal species adapted to strong and persistent north winds (tramuntana). It grows mainly in dry sunny places, especially on steep and stony slopes and is part of a plant community dominated by spiny cushion-like shrubs (Launaeetum cervicornis, habitat 3.8.3: Spiny Mediterranean heaths - phrygana, hedgehog-heats and related coastal cliff vegetation)

F. balearica is a small shrub up to 150 cm tall, usually showing a cushion-like habit. Stems are somewhat fleshy, profusely branched in a regular pattern. Numerous sharp spines about 1 cm long, arranged in groups of three, cover the stems. It has two different types of leaves; those produced in spring are linear and entire, whereas the summer leaves are divided. Flowers are gathered together in yellow flower heads, surrounded by a spiny involucre. It blooms between May and July, while the fruits ripen from the end of summer to the beginning of autumn.

The spines of other cushion-like shrubs of the plant community where F. balearica occurs protect it against herbivores and trampling, but unfortunately not from motor vehicles. With respect to other species of this plant community, F. balearica shows more peculiar ecological requirements. It is usually found in more open patches with higher grass cover and has some ability to colonize somewhat disturbed soils, therefore low-intensity grazing could be beneficial for its recruitment.

Recent research showed that the three known subpopulations are somewhat genetically differentiated, thus their isolation might have occurred a long time ago.

The proposal to place the species within the monotypic distinct genus Femeniasia clearly mirrors its outstanding position within the Cardueae tribe and the Centaureinae subtribe.

This species has been revaluated and downscaled to VU (Vulnerable) according to IUCN Red List Criteria D2. This means that the species has a small distribution area (<20 km2) and less than five known populations. Although, as indicated below, most of the important threats have gone under control, there is still a risk that a single event (i.e. wildfire) or a new threat (i.e. biotic pathogen or predator affecting composites), could bring the species back to CR (Critically Endangered) in a short time.

The re-evaluation of its threat level with respect to the evaluation of 2005 comes from a better knowledge of its whole distribution and population census (over 3400 individuals in 2014). Its AOO is roughly 0.5 km2, but within the last ten years no negative fluctuations have been observed, whether in the distribution area or in the number of mature plants. Moreover, an acceptable recruitment level has been confirmed in monitoring works. In the last 12 years some of the most important threats have gone under control in the two most important subpopulations (Favàritx and Cala Mica - Binimel·là), i.e. uncontrolled roads (threat 6.1: Roads and railroads), alien invasive plant species occurrence, mainly Carpobrotus spp. (threat 8.1.2: Invasive non-native/alien species - Named species), soil tillage (threat 2.1.2: Small-holder farming) and excessive human frequentation (threat 6.1: Recreational activities). However, the subpopulation of Fornells-Tirant is still threatened with soil tillage, concentrated to small areas, and with the development of touristic resorts (1.3: Tourism & recreation areas).

In situ: The entire population falls within the following Spanish Natura 2000 network sites, ES0000231 ‘Dels Alocs a Fornells’, ES0000232 ‘La Mola i s'Albufera de Fornells’, ES0000233 ‘D'Addaia a s'Albufera’. Since 2001 two LIFE Nature projects have been focused on the long-term conservation of this species. Within LIFE2000 NAT/E/7355 (http://lifeflora.cime.es), developed from 2001 to 2005, actions related to the conservation of F. balearica were mainly addressed at the eradication of the alien invasive Carpobrotus spp., social awareness and the elaboration of a management plan. Later on, in 2012, this management plan was approved by the Regional Government of the Balearic Islands and updated as a Conservation Plan according to regional legislation.

Some actions of LIFE+ LIFE07/NAT/E/000756 (http://lifereneix.cime.es), developed from 2009 to 2014, aimed at the conservation the biggest population of F. balearica (Cala Mica – Binimel·là) by facing two threats: uncontrolled roads and excessive human frequentation. A recent monitoring of the restored areas within this project showed that F. balearica is able to perform active re-colonisation.

Besides the actions of these projects and the development of the Conservation Plan, active management activities focused on this species, such as the monitoring of the populations and their threats, are still ongoing.

Ex situ: F. balearica is widely cultivated in several botanic gardens, and at a regional level at Sóller Botanic Garden (Majorca). Moreover, seeds from the three subpopulations have been collected in 2014 and 2015 and will be stored at the germplasm bank of Sóller.

Monitoring of the issues of the conservation actions developed within LIFE projects is recommended in order to see if they are effective in the long term and, in particular, to see what will be the long-term response of the species to habitat restoration. It is also very important to assess if the recruitment patterns observed in some areas will last with a regular positive trend.

The population of Fornells-Tirant needs an evaluation of the real impact of the threats and the development of suitable actions if needed in order to prevent a return to a higher risk category.