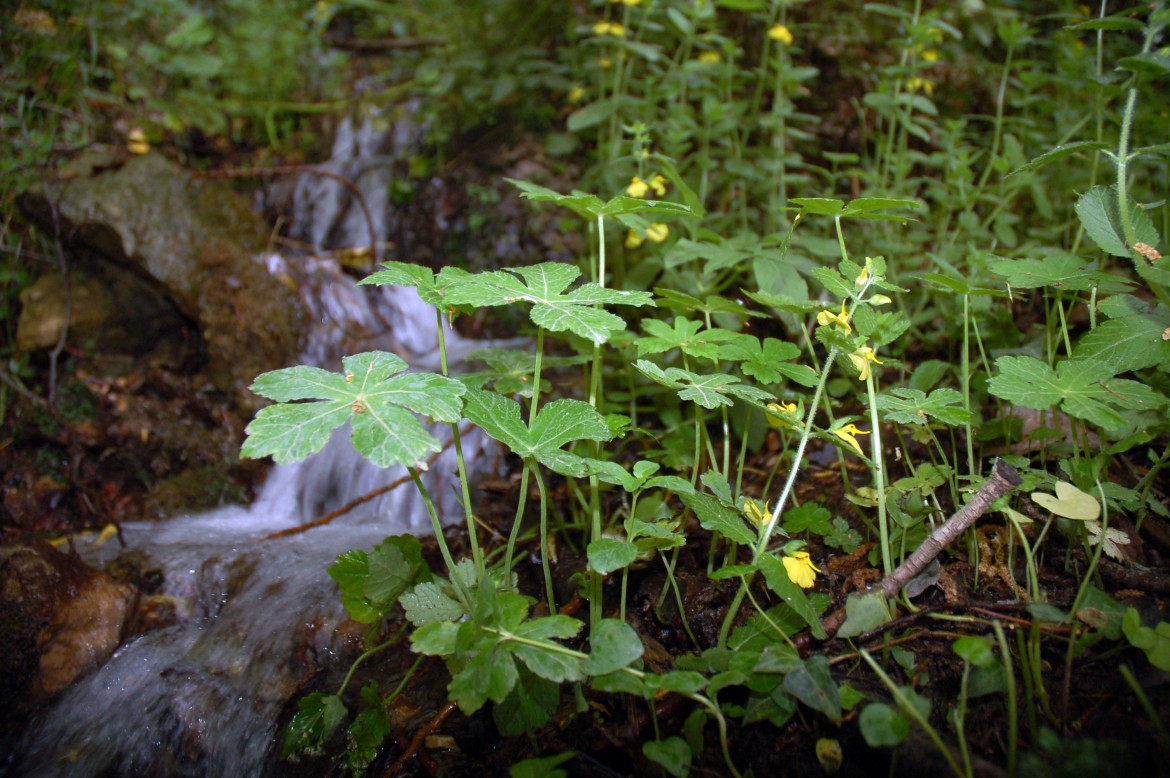 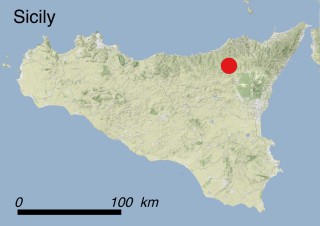 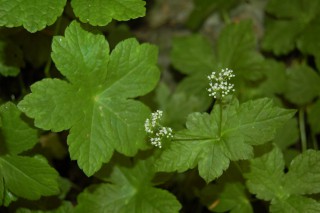 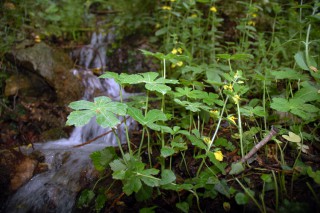 Petagnaea gussonei is endemic to the Nebrodi Mountains (north-eastern Sicily) and is only known from 21 locations scattered over an EOO of 69.5 km2 from 240 to 1450 m a.s.l. It grows on the edge of hygrophilous vegetation belts bordering shaded woodland along permanent mountain streams (habitat 5.1: Permanent Rivers, Streams, Creeks). In some cases it also occurs near freshwater springs (habitat 5.9: Freshwater springs and oases).

P. gussonei is a perennial herb that smells like the common edible celery. The basal leaves are peltate and have five equal lobes and small teeth at the margins; the upper leaves growing on the stem are tripartite. The typical umbrella-shaped umbel is formed by umbellules, each bearing four white flowers: a central stalkless flower, which can be either female or bisexual, surrounded by three stalked male flowers. The latter are more or less united with the ovary of the central flower. Flowering usually occurs between April and May, but can last until June at the higher sites.

This species mostly reproduces asexually through horizontal stolons sprouting from the base of the plant. Vegetative propagation may be enhanced by mechanical damages due to trampling from the livestock crossing the water courses. This mechanism allows the plant to colonize the wet edges of the streams. Reproduction from seed occurs only occasionally. Petagnaea is a rather isolated genus within the tribe Saniculoideae. The nearest genus is Astrantia, which has a South and East European-Caucasian distribution range. Together with Siculosciadium, another member of the celery family, it represents the only endemic genus of the whole Sicilian vascular flora.

Considering the low number of known subpopulations (just 21), each of them counting less than 100 mature individuals and covering an AOO of 56 km2, and the fact that many of them are subject to several threats, this species has been categorized as EN (Endangered) according to IUCN Red List Criteria C2a(i). Recent field investigations suggest a gradual decline in the AOO, habitat quality, number of individuals and subpopulations, due to the modification of the local surface and groundwater regime (threats 7.2.1 and 7.2.3: Abstraction of surface water, for domestic and agricultural uses, respectively). In addition, tree plantations with alien conifers were carried out along the mountain streams inducing a strong alteration of the both local hygrophilous vegetation and soil patterns (threat 7.3: Other ecosystem modifications). Livestock trampling in the sites where the plant occurs, especially during summer, represents another relevant threat (2.3.2: Small-holder grazing, ranching or farming).

Legally: this species is listed in Appendix I of the Bern Convention and in Annexes II and IV of the EC Habitats Directive. In both these documents the species is listed under its synonym Petagnia saniculifolia Guss.

In situ: 6 subpopulations out of the 22 known ones are found in unprotected areas, while the others occur within the Nebrodi Regional Park, in the “Vallone Calagna sopra Tortorici” Nature Reserve, as well as in several Natura 2000 sites (ITA030043 “Monti Nebrodi”, ITA030001 “Stretta di Longi”, ITA030002 “Torrente Fiumetto - Pizzo D’Ucina”, ITA030013 “Rocche di Alcara li Fusi”, ITA030038 “Serra del Re - Monte Soro - Biviere di Cesarò”, ITA070007 “Bosco del Flascio”), whose management plans, aiming towards the conservation of wild species and habitats, have been recently approved. No monitoring activity has been funded at present but a LIFE Project focused on the conservation of the species is going to be submitted to EU Life Commission in the near future.

Ex situ: The plant is cultivated by the Universities of Palermo, Catania, Messina and Naples as well as in the English Gardens (“Giardini inglesi”) of the Bourbons’ Royal Palace (“Reggia di Caserta”) north of Naples.

A careful water management is the key to the preservation of the wet habitats of freshwater streams and springs where the species grows, particularly in unprotected locations. The gradual eradication of allochthonous conifer plantations, as well a thorough assessment concerning the sustainable grazing and trampling pressure due to livestock, should be planned and carried out.

Additionally, financial support is needed for reintroducing the species in sites where it has disappeared.