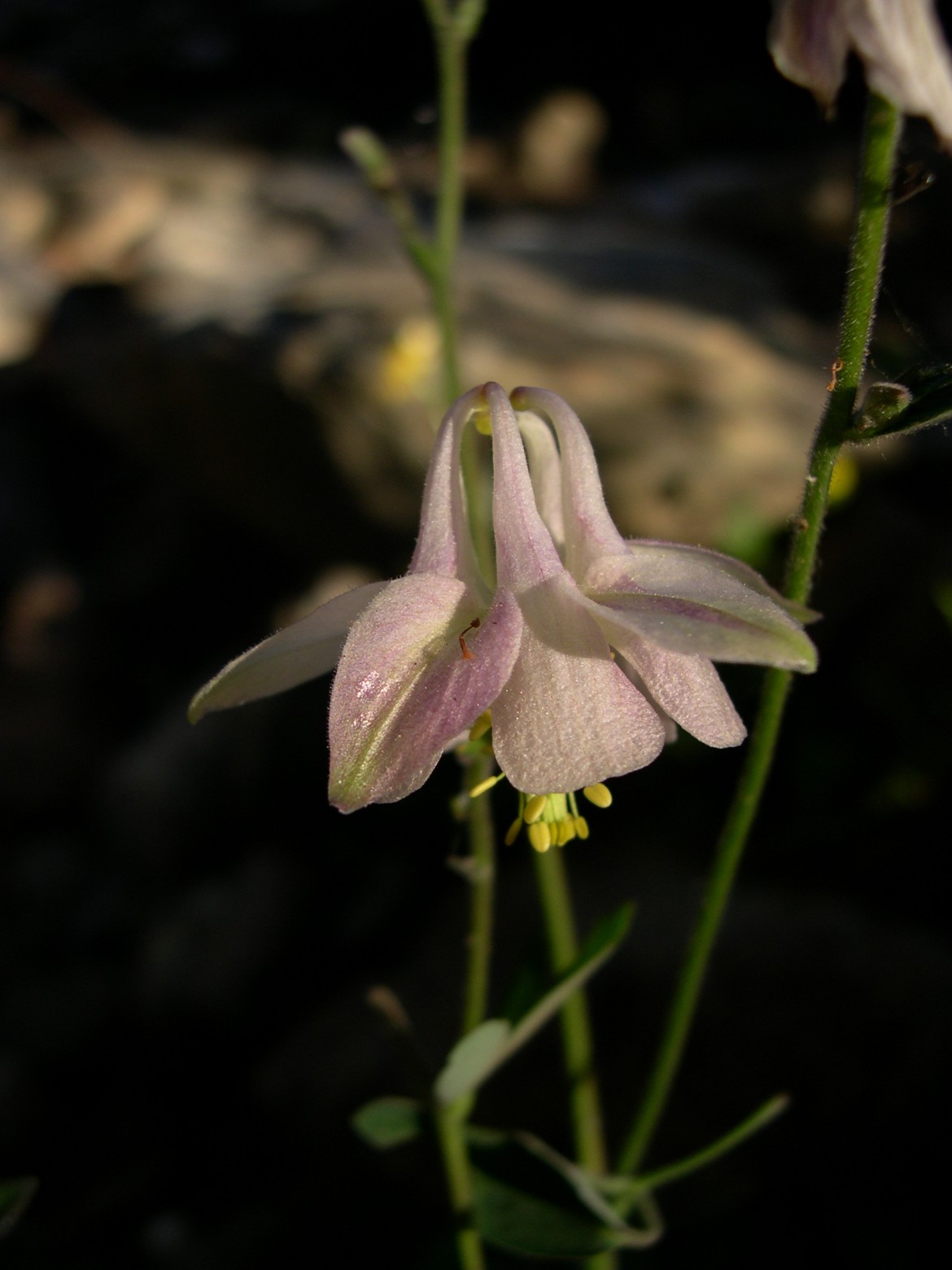 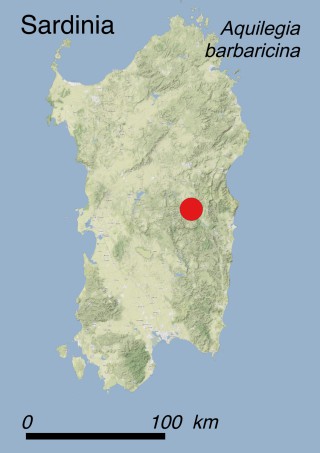 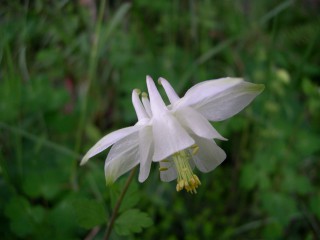 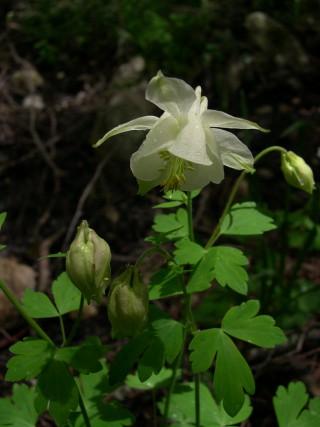 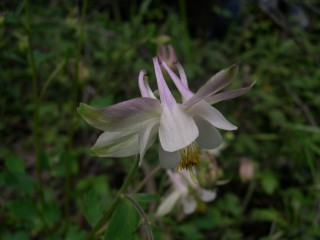 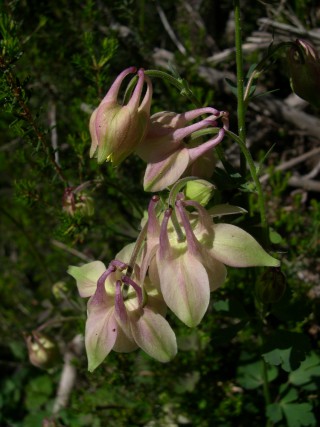 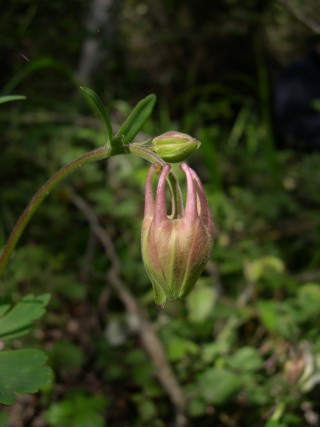 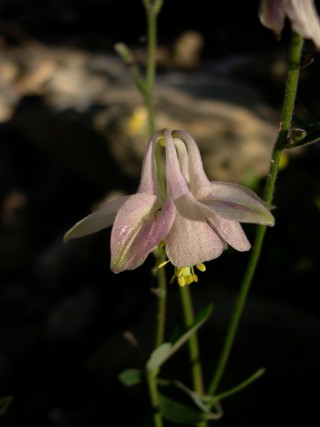 Aquilegia barbaricina, an endemic plant to Sardinia, is found in the mountains of the island at altitudes ranging from 900 to 1400 m a.s.l. This plant grows in wet woodlands (habitat code: 1.4.1: Broadleaved deciduous woodland), meadows (habitat 4.4.3: Seasonally wet and wet grasslands) and alongside streams (5.2: Seasonal-Intermittent-Irregular Rivers, Streams, Creeks), mainly occurring on siliceous substrates and more rarely on limestone.

Until 2005 A. barbaricina was only known from a few localities, in the central part of Sardinia. Recent field investigations and a genetic study on the genus Aquilegia in Sardinia strongly improved the knowledge on the present distribution range of this species: to date seven populations have been found. They are located in Monte Spada, Rio Correboi, Nodu ’e Littipori (Fonni), Rio Olai (Orgosolo) and Su Sterzu (Talana) in the Gennargentu Massif, and, in Codula Orbisi (Urzulei) and in Badde Enis (Orgosolo) in the Supramontes region.

A. barbaricina is a rhizomatous plant with a subterraneous, stout stem and aerial stems up to 30-60 cm tall, covered with fine hair, branching in the upper part of the stem into 3-5 nearly leafless flower stalks. The leaf petioles are divided once or twice (rarely three times), each division resulting in either a further set of three leaf-bearing stems, or (at a higher level) three leaflets. The cauline leaves have short petioles and are smaller. Leaflets are trilobate with nearly rounded teeth on their outer edge. The pedicel is curved during flowering which occurs in May. The perianth is white to white-pinkish, the sepals lanceolate and 5-8 mm wide. Each petal has a slightly curved spur pointing straight upwards. The fruit is an erect capsule, produced in June.

A. barbaricina belongs to the A. vulgaris complex, from which it differs in the usually white to white-pinkish flowers, the different orientation of the flower blade compared to the spur, the funnel-shaped structure and height of the lightly hooked spur, and the anthers which are yellow at maturity.

First described in 1977, this species is considered a “neoendemic” plant issuing from post-Pleistocenic geographic isolation. Recent genetic analyses carried out across the whole distribution range of the Sardinian exclusive taxa of Aquilegia, revealed extremely low levels of genetic diversity in A. barbaricina. This low diversity might be the consequence of local adaptation (divergent selection) to particular environmental conditions, with selection eroding genetic variability. The intra- and inter-specific diversity of habitats may indicate that habitat specialization by divergent selection could have been a very relevant force contributing to population differentiation and species divergence, although this needs further investigation. Additionally, the limited dispersal ability of this species appears to confirm the probably recent geographical isolation of the species.

The main threat affecting all populations of A. barbaricina is overgrazing and trampling, largely linked to the high number of domestic livestock such as cows, goats and horses (threat 2.3.2: Small-holder grazing, ranking or farming) and wild ungulates such as mouflons (threat 8.2.2: Problematic native species – named species), leading to considerable damage to the Aquilegia populations, in particular those located in the Gennargentu Massif.

Additionally, its rarity and the beauty of its flowers make A. barbaricina attractive for collectors and researchers, who can easily access most populations; hence the uncontrolled withdrawal of individuals for scientific purposes or for collecting (threat 5.2.1: Gathering terrestrial plants - Intentional use) represents a relevant threat to the species; in fact, several information and images of this species are commonly reported in many guide books and on websites, thus becoming an attraction for collectors.

Some populations, in particular in the Supramontes region, are also threatened by natural factors such as rockfall (threat 10.3: Avalanches/landslides) and floods (threat 11.4: Storms & flooding) that periodically occur.

Based on the Extent Of Occurrence (EOO = 78.46 km2), Area Of Occupancy (AOO = 8 km2), number of locations (one, calculated considering that the main threat affects all populations) and an observed decline due to habitat loss and reduction in mature plants, A. barbaricina must be considered Critically Endangered (CR) according to the IUCN Criterion B : B1ab(i,ii,iii,iv,v)+2ab(i,ii,iii,iv,v).

Legally: Currently there is no legal protection for this species; despite the fact that the Regional Council of Sardinia proposed in 2005 a (not yet approved) law concerning the protection of the islands’ plant species.

In situ and Ex situ: The Autonomous Region of Sardinia funded in 2008 a conservation project aimed at the safeguard of the ten most threatened endemic plant species of the island comprising in situ and ex situ studies. As part of this project, the Biodiversity Conservation Center of the Cagliari University started an in situ periodic monitoring of all known populations of A. barbaricina. Therefore, the surface of each population as well as all mature plants (ca. 700 individuals) are monitored every year. At the same time, a long-term ex situ conservation program at the Sardinian Germplasm Bank was initiated. This program has enabled the conservation of seeds coming from the different populations, and duplicata were also sent to the Millennium Seed Bank (Royal Botanic Gardens of Kew).

Moreover, the project allowed to carry out specific studies on this plant related to its conservation status assessment, the study of its phenological patterns and seed ecophysiological traits, the genetic characterization of its populations and led to the description of a new species of Aquilegia endemic to the Supramontes region, named A. cremnophila.

The populations should be protected in order to eliminate (or reduce) grazing pressure and to forbid the collection of plants by collectors, researchers or tourists. In particular, the populations of Monte Spada and Rio Correboi, and those of Nodu ’e Littipori (Fonni), Rio Olai (Orgosolo) and Su Sterzu (Talana) in the Gennargentu Massif urgently need to be fenced.

Further research is needed in order to better understand the exact distribution, the reproductive biology and the ecology of A. barbaricina.