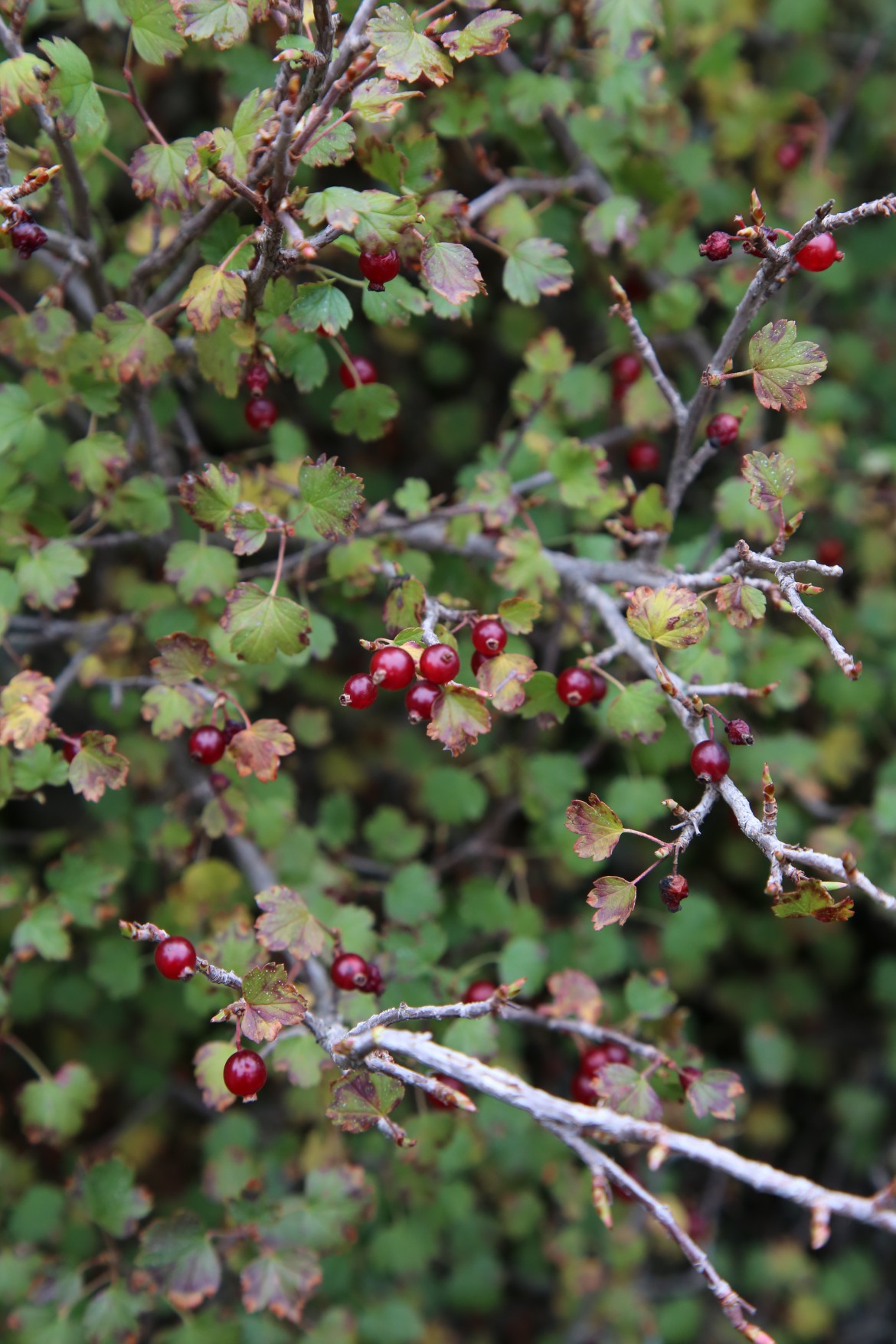 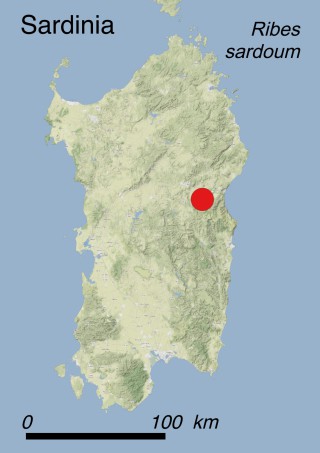 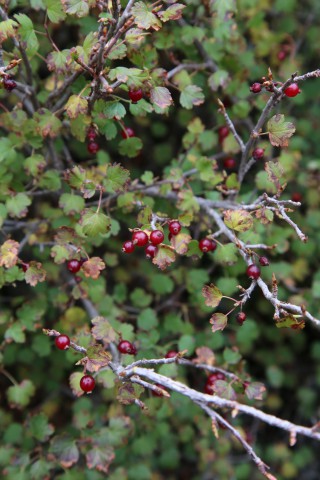 Ribes sardoum is a narrow endemic plant growing in a single population located in Prados (Monte Corrasi, Oliena). The population consists of ca. 80 mature plants spreading over an area of ca. 700 m2.

R. sardoum is a mesophilous plant growing on dolomitic limestone at 1160 m a.s.l.

Unfortunately no data are available to place this plant in a specific plant community. Based on preliminary studies, R. sardoum can be framed to the Pruno-Rubion ulmifolii O. Bòlos 1954 alliance (habitat 3.4.1:Temperate and Mediterranean-montane scrub).

Ribes sardoum is a small deciduous shrub 0.8-2 m tall, with leaves 1-2 cm wide, ovate or nearly circular, with three to five small lobes and a hairy, glandular leaf stalk. The small and inconspicuous greenish-yellow flowers are solitary with short stalks. The fruit are red, ovate berries.

The flowering season lasts from April to the beginning of June, and fruiting season from late July to October. Mechanisms of reproductive biology (i.e. seed dispersal, seed germination, clonal reproduction) are largely unknown. the species has been reported to have a low fertility due to the early dropping of ovaries and, consequently, a low rate of fruit production as well as a low seed viability.

Ribes sardoum shows numerous morphological and biological characters that are very distinct from all other congeneric taxa. For this reason, the monotypic subgenus Oligocarpa has been created ad hoc. More in detail, it differs in having a peculiar vegetative and flowering apparatus, for the co-existence of ovules and fertile anthers on the same flower, and for the imperfect functionality of the male parts in some flowers, which causes a lack of pollen production and reduced fruit output.

Results of genetic analyses revealed that R. sardoum has a medium to low genetic diversity at the population level. In addition, the population showed a high level of inbreeding, in accordance with its very small size. This indicates that R. sardoum originated from ecologically-based divergent, habitat-driven selection. Such a pattern may be the consequence of genetic bottlenecks during the post-glacial re-colonization of the Mediterranean realm. The phylogenetic differentiation of R. sardoum from the other European Ribes likely indicates a more ancient and independent origin and hence it must be considered as a paleoendemic species, once probably spread throughout the boreal zone, moving to warmer areas as the climate changed. It is now considered a relict species as it is no longer found anywhere else. Its closest relatives occur in China, Japan, and North America.

In addition, the genetic patterns observed in R. sardoum are known to enhance the extinction probability in species suffering of range contraction and habitat degradation (threat 11.1: Habitat shifting & alteration); hence, at present, the future survival of this species in its natural environment cannot be predicted.

Based on the Extent Of Occurrence of 700 m2, Area Of Occupancy of 1 km2, the surface-area occupied by the population ca. 700 m2, the small population size, ca. 80 mature plants, the single location and the inferred decline due to habitat loss, the reduction in occupied surface-area and in reproductive plants, R. sardoum must be considered Critically Endangered (CR) according to the IUCN Criteria B and C.

To summarise, R. sardoum must be considered Critically Endangered (CR) according to the formula : CR B1ab(iii,v)+2ab(iii,v); C2a(ii).

Legally: Ribes sardoum is listed in Appendix I of the Bern Convention and, as a priority species, in Annexes II and IV of the EEC Habitats Directive. Currently there is no legal protection for this species, despite a (not yet approved) proposal by the Regional Council of Sardinia (2005) of a law concerning the protection of the island’s plant species.

The species was included in an agreement concerning the protection of the endemic flora of the town of Oliena (Nuoro). However, this instrument has not yet had any real impact on the threats affecting the population.

The Autonomous Region of Sardinia funded in 2008 a conservation project aimed at the safeguard of the ten most threatened endemic plants species of the island comprising in situ and ex situ studies. As part of this project, the Biodiversity Conservation Center of the Cagliari University started a periodic in situ monitoring of all know populations and the reproductive plants are monitored every year.

Ex situ: At the same time, a long-term ex situ conservation project was initiated at the Sardinian Germplasm Bank. Specific studies on the population characterization and conservation status assessment of the species were carried out through the above mentioned project.

Some plants of R. sardoum, obtained from seeds, are cultivated at the Hortus Botanicus Karalitanus of the Cagliari University.

The last remnant population of R. sardoum, consisting of ca. 80 individuals all living in a single locality, needs a strict protection programme. In particular, serious management plans to protect the species from overgrazing and human disturbance should be developed. Therefore, fencing could be an immediate and effective solution to avoid further damages to the unique extant population.

The monitoring activities of the single population must be continued and the long-term ex situ seed conservation project, already started at the Sardinian Germplasm Bank, should be continued in order to conserve the highest possible genetic variability and obtain plant material for future reinforcement activities.

A translocation project, using plants produced from seeds, has been carried out in 2016 by Hortus Botanicus Karalitanus (Cagliari University) within the Care-Mediflora project. Monitoring activities are currently ongoing to verify the effectiveness of this in situ conservation action.

In depth biological, ecological and further genetic analyses should be carried out to shed light on the effective reproductive biology, demography and phylogenetic relationships of this endemic plant.