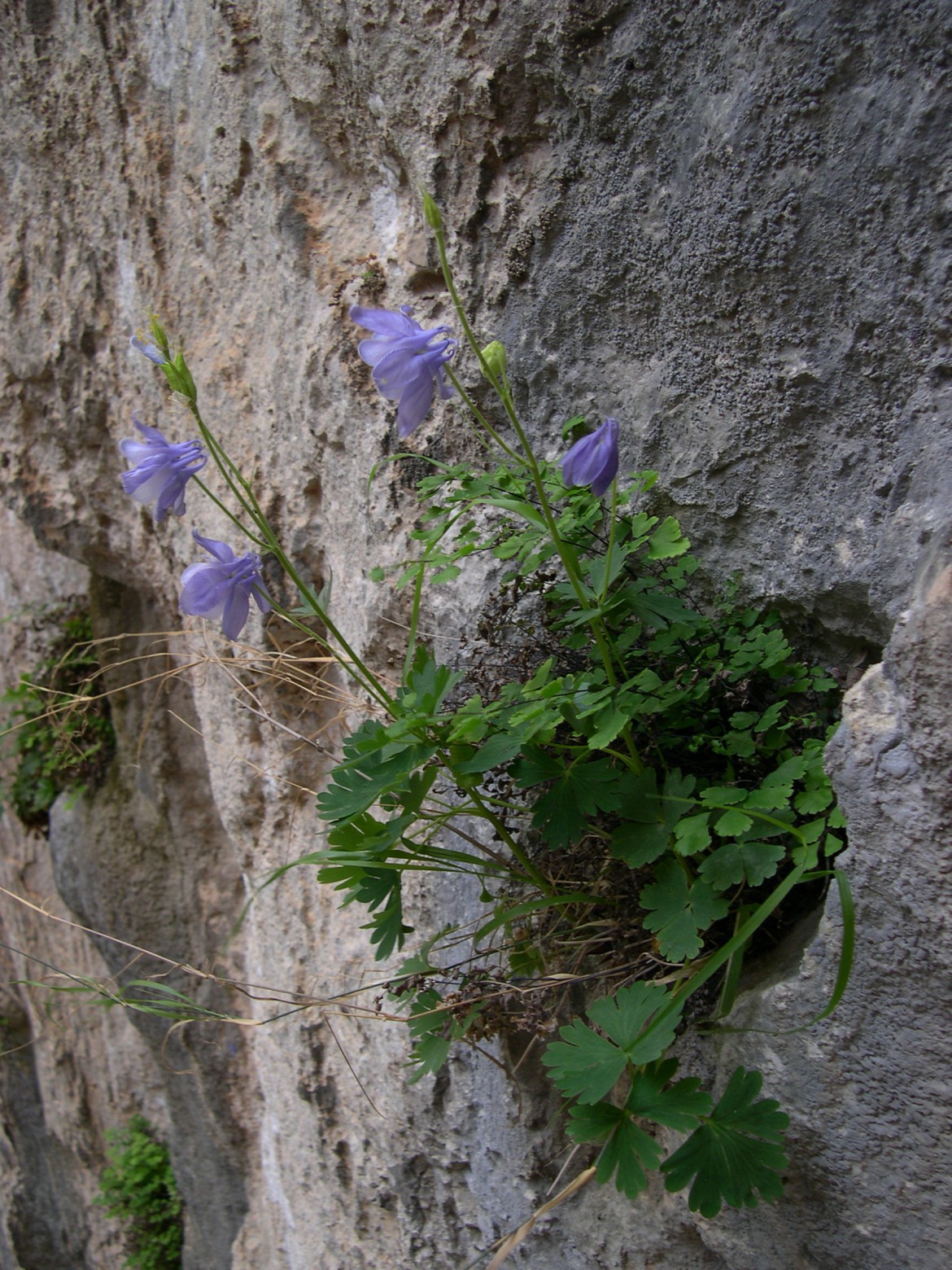 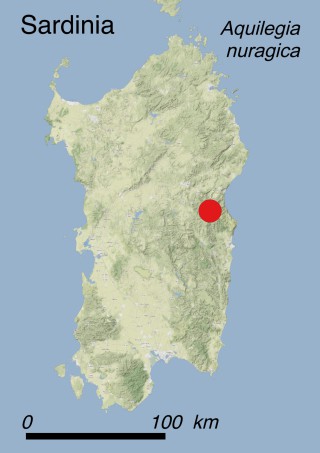 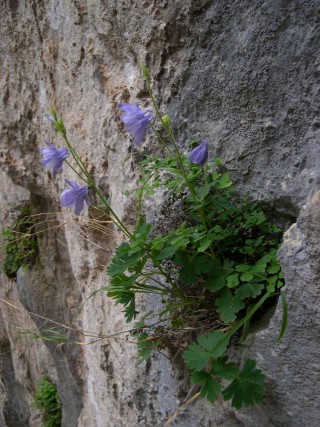 Aquilegia nuragica, a narrow endemic to Sardinia, is known from a single population, covering an area of about 1000 m2 at an altitude of 620-680 m a.s.l., located in the Gorropu canyon (Urzulei-Orgosolo).

The population grows on a wet vertical limestone cliff (habitat 6.2: Inland cliffs – rock pavements and outcrops), extremely difficult to access. Occasionally some plants occurred in the dry, sandy pebbly substrate of the riverbed issuing from seeds dispersed from the overhanging cliff; however only a few individuals grow here, because they are regularly washed away during the seasonal flooding of the Flumineddu river.

During the last years no plants were found in the riverbed, probably due to the above-mentioned floods and/or as a consequence of their gathering from tourists and collectors.

Recent field investigations and a genetic study on the genus Aquilegia in Sardinia confirmed that the population growing in the Gorropu canyon is the only to be referred to A. nuragica, while the one located on the Mt. Corrasi belongs to a different species, A. cremnophila.

A. nuragica is a rhizomatous plant with a partially subterraneous, stout, scarcely branching annual stem up to 20-35 cm tall, glabrous at the bottom and covered with fine hairs or glands higher up. All basal leaves have 15-25 cm long, hairless stalks, and have a complex branching system, each division resulting in sets of three (stalks or leaflets). Smaller leaves growing along the stem have a less complex branching pattern. Leaflets consist of three segments, not always clearly separated, each with pointed teeth on the outer edge. The pedicel is erect during the flowering period (May). The perianth is blue-green to blue-violet and the sepals are ovate to ovate-lanceolate and 9-14 mm wide. Stems and petioles are glabrous to glandular-puberulous, the spur is 11-13 mm long. The single, lilac or purplish flower measures over 40-56 mm in diameter. Petals are 26-30 mm long and their blade is appressed, obovate, with a rounded apex 15-18x10-13 mm long. The fruit is an erect, drop-shaped capsule with little hooks on the tip.

The recent genetic analyses, carried out across the whole distribution range of the Sardinian exclusive taxa of Aquilegia, revealed extremely low levels of genetic diversity in A. nuragica. These reduced diversity values might be the consequence of local adaptation (divergent selection) to particular environmental conditions, with selection eroding genetic variability. The A. nuragica population at Gorropu Canyon is probably the most geographically isolated in Sardinia and presents no admixture and does not share any genetic information with other Sardinian Aquilegia taxa. Thus, it is probably subject to high levels of genetic drift.

Aquilegia nuragica may be ascribed to the same ancient Cyrno-Sardinian complex of A. litardierei. Its numerous archaic morphological characters suggest an ancient differentiation of this plant and, at the same time, a long geographical isolation.

A. nuragica is facing high extinction risk mainly due to natural factors rather than through human impact. The main threats that resulted in a recent reduction in the population are the seasonal floods of the Flumineddu river (Threat 11.4: Storms & flooding) and, secondarily, the uncontrolled gathering of individuals by researchers and tourists (Threat 5.2.1: Gathering terrestrial plants - Intentional use).

Also tourist and recreational activities, in particular climbing (Threat 6.1: Recreational activities) close to the population could represent a serious threat to A. nuragica. Another potential threat is related to the natural evolution of the rocky cliff, prone to collapses (Threat 10.3: Avalanches/landslides).

Based on the Extent Of Occurrence (EOO = 1000 m2), Area Of Occupancy (AOO = 1 km2), the surface-area occupied by the population (about = 800 m2), the single location and the observed decline due to habitat loss and reduction in reproductive plants, A. nuragica must be considered Critically Endangered (CR) according to the IUCN Criterion B. In addition, monitoring activities carried out in recent years allow us to estimate that the whole population consists of ca. 40 mature individuals; hence, this plant must be considered Critically Endangered (CR) also according to the IUCN Criterion D.

Summarising, A. nuragica must be considered Critically Endangered (CR) according to the formula: B1ab(iii,v)+2ab(iii,v); D.

Legally: currently there is no legal protection for this species; despite the fact that the Regional Council of Sardinia proposed in 2005 a (not yet approved) law concerning the protection of the islands’ plant species.

In situ: The Autonomous Region of Sardinia funded in 2008 a conservation project aimed at the safeguard of the ten most threatened endemic plants species of the island comprising in situ and ex situ studies. As part of this project, the Biodiversity Conservation Center of the Cagliari University started a periodic in situ monitoring of the population and the mature plants are monitored every year.

Ex situ: Due to the low number of mature individuals and the extreme difficulties in germplasm collecting, ex situ conservation measures have not yet been undertaken.

The project allowed to carry out specific studies related to conservation status assessment of the species and the genetic characterization of its population as well as a taxonomic studies on this genus in Sardinia.

To ensure the persistence of A. nuragica its only population should be more strictly protected: all recreational activities (i.e. free climbing) should be prohibited near the population and the collection of plants strictly forbidden. The species is mentioned on several tourist websites, which might attract collectors, and any detailed information concerning the exact location of the population should be removed in order to keep people away from the site.

The in situ monitoring should be continued and, as a precautionary measure, the ex situ seed conservation should be started. A translocation project, starting from plants cultivated ex situ, should be implemented in a suitable area.

Further research is needed in order to better understand the exact distribution, the reproductive biology and the ecology of A. nuragica.